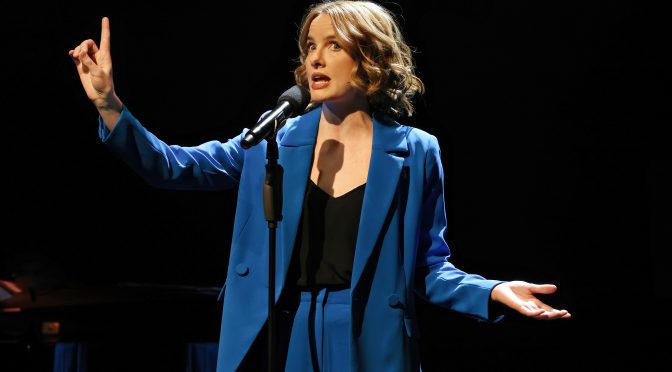 In this World Premiere of BECOMING ELIZA, Anna O’Byrne tells her personal story of playing Eliza in the 2016 recreation of the original musical My Fair Lady. Dame Julie Andrews personally interviewed, coached and gently encouraged Anna in the famous role. Anna won a Helpmann Award for her performance. For 70 minutes, wearing a classic blue Julie Andrews suit, Anna describes rehearsals, auditions and performances.

There are many levels to Anna’s story. She was a shy girl who felt comfortable playing in the second row of the high school orchestra. She had to transform herself into a confident professional performer in front of large audiences for over two years in the role of Eliza. It’s her story-within-a-story.

In the original story, the basic theme is man’s desire to create a woman in his own image. ‘Why can’t a woman be more like a man?’ In 8 AD, Ovid wrote Metamorphosis, the poem of the sculptor who fell in love with a statue of a woman he had carved. The statue comes to life. In George Bernard Shaw’s 1913 play Pygmalion, Henry Higgins tries to transform Eliza into some version of himself. It’s toff versus Cockney set in the height of the English class system. Then came Lerner and Loewe’s 1950s Broadway hit, My Fair Lady, with Julie Andrews (now aged 86) and Rex Harrison. In 2016, we had Australia’s recreation of the famous musical, starring Anna in the role Julie played 60 years earlier. The show played in Sydney and around Australia for over two years.

Now, 2022, Anna’s personal story of playing Eliza is delightful. There could not be a better recommendation than Julie Andrews’ quote: “Anna O’Byrne is one of the loveliest Australian actresses in musical theatre today. Her portrayal of Eliza Doolittle in My Fair Lady was wonderful and now her one woman show BECOMING ELIZA is a tour de force. Don’t miss it! It will warm your heart.”

Anna sings songs from musicals including Camelot, The Sound of Music, of course, My Fair Lady. She is accompanied on piano by the Musical Director Guy Simpson and by Michele O’Young (violin), Heather Lindsay (cello) and Daniel Dean (bass).

BECOMING ELIZA is directed by Sharon Millerchip. The Producer is Enda Markey. The show is playing The Playhouse at the Sydney Opera House until June 12, 2022. It then plays in Adelaide on June 19, 2022.