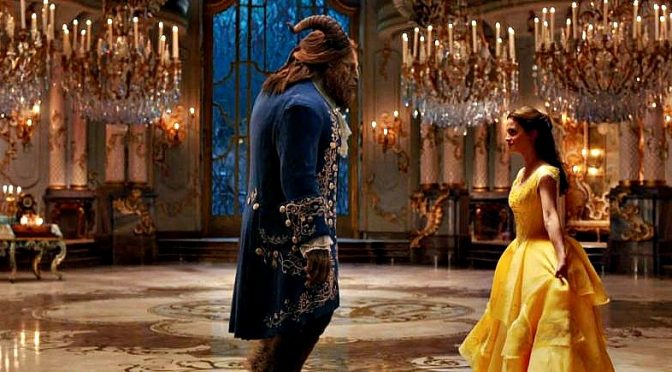 When the animated film BEAUTY AND THE BEAST was released in November 1991, the film became an instant  classic.

With the film’s rich, beautiful, high quality level of animation and musical numbers that everyone loves and remembers, it belongs to an era known as the Disney Renaissance which includes films such as The Little Mermaid, Aladdin and The Lion King.

This was a time when the studio was enjoying a resurgence in producing hit animated films. BEAUTY AND THE BEAST was the third highest grossing movie of the year, just behind Terminator 2: Judgement Day and Robin Hood: Prince of Thieves. The film made over $400 million; the highest ever grossing animated film up until that point.

In recent years Disney has been experiencing success with live action remakes of its back catalogue of old animated films. First it was Tim Burton’s Alice in Wonderland, then Maleficent, a remake of Sleeping Beauty in 2014, The Jungle Book in 2016, remake of the 1967 version. To list a few in the works are live action remakes of: The Lion King, Aladdin, Dumbo, Mulan and even a sequel to Mary Poppins scheduled for sometime in 2018.

Understandably, there was enormous pressure on director Bill Condon (Gods and Monsters, Chicago, Dreamgirls) to come up with something special with his new version. Condon’s strong cast brings his particular vision’ vividly to life.

Emma Watson, best known as Hermione in the Harry Potter films, gives an enchanting performance as the Beauty.

Dan Stevens as the grisly and brooding Beast was a brilliant, as was Luke Evans as the narcissistic and arrogant villain Gaston who was a joy to watch.

Josh Gad as Le Fou, Gaston’s sidekick and secret lover, is very funny. Gad’s portrayal is one of the first, if not the first openly gay character, to be portrayed in a Disney film. This has outraged has some, and there has been a drive in cinema in America that has refused to show the film.

While the film was never going to be as good or nostalgic as the 1991 animated version, this latest movie version does make for great entertainment.

The new film still contains the original numbers created by musical duo Howard Ashman and Alan Merkin such as “Be Our Guest”, “Belle” and the perennial favourite “Beauty and The Beast”. “Be Our Guest” in particular was spectacular with its dazzling CGI.

The castle, the old French villages were all stunning.

A tale as old as time itself, BEAUTY AND THE BEAST will be released in Australian cinemas on March 23.

One thought on “BEAUTY AND THE BEAST: THE CLASSIC TALE REVISITED AGAIN ON THE BIG SCREEN”