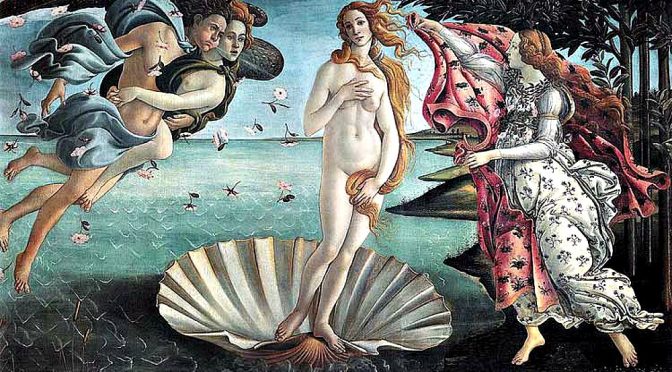 Alyssa Palombo’s book THE MOST BEAUTIFUL WOMAN IN FRANCE strikingly captures the dangerous allure of the bond between artist and muse with delicacy, candour and unforgettable passion.

Palombo is also the author of The Violinist of Venice. She has published short fiction pieces in Black Lantern Magazine and The Great Lakes Review. A recent graduate of Canisius College she holds degrees in English and creative writing. A passionate music lover, she is a classically trained musician as well as a big fan of heavy metal. She currently resides in Buffalo, New York.

Divided into three sections, the book opens in Genoa where Simonetta Cattaneo was born and lived. She is believed to be the model for some of Sandro Botticelli’s finest paintings, including The Birth of Venus.

She was married to Marco Vespucci of Florence in 1469 at the age of sixteen and moved there upon her marriage. Even before her betrothal with Marco was official, Simonetta was drawn into Lorenzo and Giuliano de’ Medici’s glittering circle of politicians, poets, artists, and philosophers.

The men of Florence―most notably the rakish, rather sinister Giuliano de’ Medici―become enthralled with her beauty. That she is educated and an ardent reader of poetry makes her even more desirable and fashionable …

Florence, however, does not really agree with Simonetta as she eventually keeps on becoming ill. She suffers from recurring mysterious fevers – it turns out Simonetta unknowingly developed TB.

The book follows Simonetta’s tragically short life as she is wooed by the promise of life in artistic, learned Florence, befriended by the mighty Medici family and then moves in the top echelons of Florentine society, what we would now call the A-list, and is given the mixed blessing of being declared the most beautiful woman in Florence.

Simonetta’s unhappy marriage to Marco is well described. The developments of art, music and culture are also mentioned – Donatello’s David , the works of Fra Filip Lippi the amazing dome at the cathedral of Santa Maria del Fiore, as designed by Brunelleschi.

Simonetta’s story is a poignantly sad one, but also strikingly feminist as she fights to be acknowledged for her sharp mind and education (she is bookish and intelligent with a very inquiring mind) and scorns the attention paid to her because of her astonishing good looks. It is Botticelli who sees past her looks to the curious and thoughtful woman within, and through that relationship with him she is immortalised in some of the most treasured works of the Renaissance .

Breaking all convention, Simonetta agrees to pose for Botticelli leading to the creation of his famous The Birth of Venus. Do the two become lovers?  Or is it a chaste affair following the rules of courtly love of the time?

You will have to read the book to find out. Boticelli asked to be buried at Simonetta Vespucci’s feet, in the Chiesa di San Salvatore di Ognissanti, where he remains to this day, makes this an even more seductive love story.

Though little is known of her real life, this story gathers what facts do exist to build a lyrical , fascinating and compelling narrative that is not just a love story. This is an enchanting book that captivates and makes you want to dash to the Uffizzi Gallery.
IBSN: 9781925481167