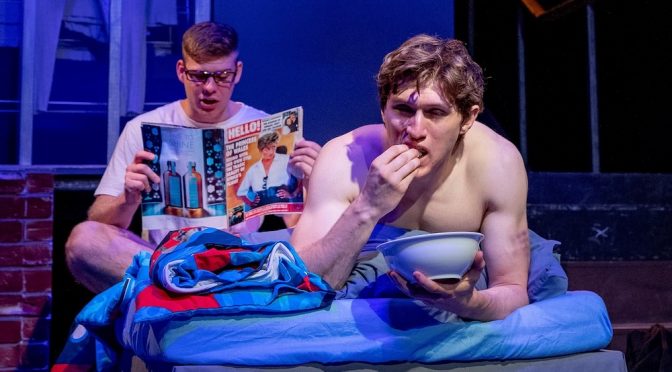 “The point is that when you’ve got a dull, boring life and something comes along that gives you a moment of happiness, you cling onto it. That’s what all of the characters in the play are looking for – some beautiful thing to cling on to. All those characters have that beautiful thing at some point in the play and that’s why it’s so cosy. Also, I wanted to write a story in which being gay was about falling in love and about emotions and having a laugh and finding your soul mate”. British playwright Jonathon Harvey ‘Beautiful Thing’ (1993)

Harvey sets his play in a government housing estate in South East London. It’s a tough world; people are living too close to each other, tempers are frayed, there’s alcoholism, domestic violence, drugs…In this world two young people find love.

In the central role, Will Manton plays teenager Jamie who going through his internal processes is coming to terms with being gay. Jamie is also having to deal with his loud, overbearing mother, Sandra, which takes up a lot of his energy. Trying to get his schoolmate and neighbour Stephen to be his boyfriend would be a beautiful thing.

Bayley Prendergast plays Stephen. He also has an Everest to deal with; an alcoholic father and a drug taking brother. One night he comes over to visit Jamie with welts on his back. He is invited to stay the night, They sleep toe to toe in Jamie’s single bed. The start of things to come.

Caspar Hardaker brings a lot of the play’s light touches in his role as Sandra’s latest boyfriend, the very flirtatious, playful Tony.

As is Hannah Zaslawski who plays Jamie’s best friend, Leah is a wild child. She’s been expelled from school, does drugs, and is a big fan of the music of Mamma Cass.

In one of the biggest scenes in the play, Leah comes out of her unit, clearly in a drug induced state, totally disorientated. It is a scene filled with comedy and pathos, and Zaslawski plays it well.

Director Mark Nagle has brought Harvey’s play to the New Theatre as part of this year’s Mardi Gras Play  Festival. It is a good piece of writing. In its depiction of teenagers coming to terms with their gay sexuality, it was radical for its time. Going back almost thirty years ago this was a time well before the principles of inclusivity and same sex martriage.

Nagle’s production serves the play well. He respects the work and doesn’t seek to update it or reinvent it, as some directors are only too keen to do. He keeps it of its time with the cast speaking in English accents. The cast maintain their accents well through the performance, which is a credit also to accent/vocal coach Carmen Lysiak and Dialect and Cultural Advisor Emma Whitehead.

David Marshall-Martin’s neatly laid-out, period set works well. The front doors to the three squashed together units face out to the audience. There is a patio, and steps down. Underneath the main stage level is another level where a drawer opens, at relevant times, to reveal Jamie’s single bed.

‘Ring the bells, that still can ring

There is a crack, a crack, in everything

That’s how the light gets in” Leonard Cohen ‘The Anthem’

Harvey’s tender, open hearted play is well worth a visit. I caught this play very late in its season. There is only one performance remaining, a matinee performance today at 2pm. The New Theatre is located at 542 King Street, Newtown. Best to give yourself time to find a park. Newtown, on weekends, can be tricky.