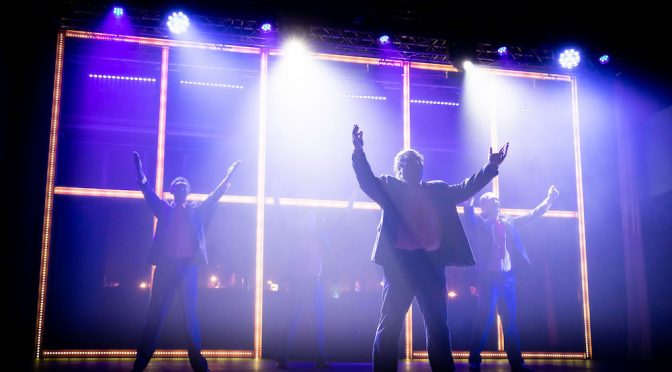 More a homage concert or what Meredith Simpson, the President of the Miranda Musical Society, the group who staged this grand production, well termed a “jukebox musical genre”, Beautiful The Carole King Musical, book by Douglas McGrath, music by Gerry Goffin, Carole King, Barry Mann and Cynthia Weil, might at first seem a must do show for an established suburban music group. Sprinkled with modern singalong and familiar classics from King, the Diamonds, Neil Sedaka, The Drifters, Barry Mann and The Righteous Brothers, what could go wrong? However, the sheer pace, variety, musical range, staging, and skills required are all a challenge – plus there is the risk of underperforming artists who have achieved such iconic fame.

Thankfully, this covid postponed production is right up to the challenge. Emilie Lawson sets a cracking pace as Carole – her figure, voice and acting all convinced, and she matched a versatile poignant singing ability with piano playing in an overall character that was absolutely essential to the performance’s success. She had a light, balanced polish right up to the task, and on occasion when song and biography overlapped, she injected a lovely emotional timbre. It is possible her mike was a little low for her speaking voice, but this is a relatively minor detail.

Just when you might think the homage would overly focus on one performer, the scale of this ensemble show lit up, from the fully choreographed Broadway Medley (Dolores Dunbar and Kristen Hockley) at its start to Beautiful at its ending, the latter with a quite thrilling elegance from King at Carnegie Hall with a fully costumed swaying blues choir in accompaniment. Musical arrangement (Peter Sampson) on stage and in the orchestra was always up to par, and there were so many lovely sung moments with 40 songs in 33 scenes. Lawson, Christopher Melotti, Tanya Boyle, and Stephan Jamal were well chosen as the quartet of song writers, edged along by a fairly simple, and factual, dramatic dialogue and thread, about King’s early life and marriage, and evolution to be a solo performer. This show is no great musical, but it is great as a dramatised concert, with some memorable 60’s classics giving strong bones for the collected skills of the Miranda society.

The Shirelles and the Drifters popped up more than once, with visual presence, costuming and strong renditions (Will you Love Me Tomorrow and On Broadway), with Anisha Okpalanze towering through The Locomotion, while Stefan Jamai reprised some very handsome Barry Mann pieces. It is of course unfair finally to selectively mention individual acts when the show featured so many from its strong singing cast of 31. At its heart were the reliable and moving renditions, by Emilie Lawson, of the King classics – You’ve Got a Friend, (You Make Me Feel Like) A Natural Woman, I Feel the Earth Move, and Beautiful. It’s all a lot of fun, and very often a moving and theatrical delight.

One felt the show was as much as a showcase of the Society as it was of King. Long standing skills, collaboration, experience and passion were present, and indeed required for such a complex event to occur so successfully. The bared yet shifting story did not leave much room for visual representation on stage. Instead an abstract translucent curtain, slick led strips and lighting (Tim Dennis) and backstage levels (Bob Peet) provides a shifting cyclorama to suggest a studio, a concert hall, various rooms and a television studio. Stage management (Meredith Simpson) and props (Rhonda Hewitt and John Widdicombe) were all up to speed and busy, and costumes (Karen Moseley and James Worner) were a significant and successful resource invited by the show’s narrative.

The long term experience, from professional, education and community contexts, of director Col Peet, could be felt throughout. A show like this might have taken time to rehearse due to Covid, but in terms of the collective experience that makes it possible it has taken even longer.

Because of refurbishment of the Sutherland Entertainment Centre the show was performed down the coast at Anita’s Theatre, Thirroul. I have never seen full theatre of the big stage of that colourful and large space – concerts, exhibits, instrumentals, but never a full show (although Beautiful was more a concert than a musical anyway). If there were problems mounting a set this was not evident – needless to say the mechanicals, engineering and technicals were all quite elaborate – although the existing sound equipment at the theatre must have aided the show. It is a program that a wide audience would well enjoy – with the effect of Covid evident on first night numbers, perhaps the show could be remounted at some later stage.

Whatever might be the occasional constraints of community theatre, this show exemplified all kinds of strengths, and congratulations are in order for all concerned.

Beautiful The Carole Music Musical is playing the Anita’s Theatre, Thirroul until 30th January, 2022.  Remaining performance are tonight Friday at 7.30pm, Saturday at 1pm and 7.30pm and Sunday at 1pm.