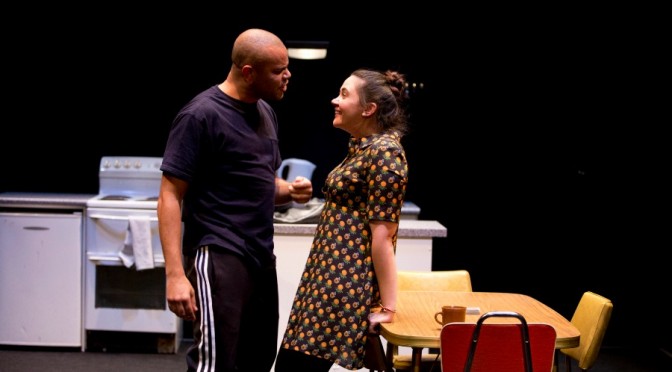 Many people treat the large housing estates/tower  blocks in Waterloo with trepidation. So many people packed into small apartments..,social problems…problems with crime. It would seem like the last place in the world where one would want to live.

Indigenous playwright Kylie Coolwell shows us another side with her play BATTLE OF WATERLOO which she sets within the James Cook housing estate. Her play celebrates the love, the sense of belonging and community that the tenants feel, and how everyone looks out for each other. This triumphs over the many hardships that are faced.

The sun sets over Waterloo, lorikeets call out the end of the day and the hum of music, cooking and conversation seep through the walls of this estate.

Matriarch figure Aunt Mavis shares her apartment with her two troubled nieces, Cassie and Sissy. Through the course of the play she remains a tower of strength, the woman who everyone leans on, when things, as they inevitably do, get tough.

Roxanne McDonald gives a wonderful performance as this gritty, earthy woman. Whilst everyone else leans on her, her only real support is her dear friend, Uncle Milo, who often comes over for a chat, a cuppa and a few games of cards. Billy McPherson gives a warm performance as this pleasant, affable man.

The two sisters that Mavis houses  have very contrasting personalities. Shareena Clanton plays Sissy, a large, brazen, imposing woman who, unfortunately, doesn’t have her act together at all. Always broke, and with a huge drug problem, everyone dreads her appearances, when she comes crashing into the apartment. Clanton gives a big performance. It’s not all heavy. She even gets to play a very comic scene.

The always watchable Sari Sebbens, who many will know from her role in THE SAPPHIRES, plays the much more reserved, delicate, sweet natured Cassie. We follow her journey, the largest of the play, and the love story around which the play pivots, as she resumes her relationship with the troubled Ray who has returned to her after years in jail.

Luke Carroll stands out in a strong, endearing performance as Ray, a big hearted family man, larrikin figure who just wants a  simple, good life but  can’t quite find it. Guy Simon  plays his best mate Leon who is always in trouble with the police.

James Slee plays Sissy’s young son, Jack, who is very close to Ray, and is forever walking around with a football in his hand, waiting for  Ray or Leon to play with him.

All real characters in a play where authenticity is its strongest feature. Coolwell puts her people on stage as they are, unflinchingly, and we get to love them a great deal. There’s plenty of coarse, strong language because that’s the way mob speaks. We hear their favourite phrases- bro, cuzz and one I hadn’t heard before- deadly- pops up a lot.

Sarah Goodes directs the play with a sure touch supported by a good creative team. The staging is simplicity itself and works wonderfully well. The main stage is Aunt Mavis’ well laid out apartment. Goodes and designer Renee Mulder hang a level above which is mainly used for street scenes and also holds a balcony for some party scenes.

Well worth a visit, Kylie Coolwell’s BATTLE OF WATERLOO is playing Wharf 1 at the Sydney Theatre Company until the 27th June.