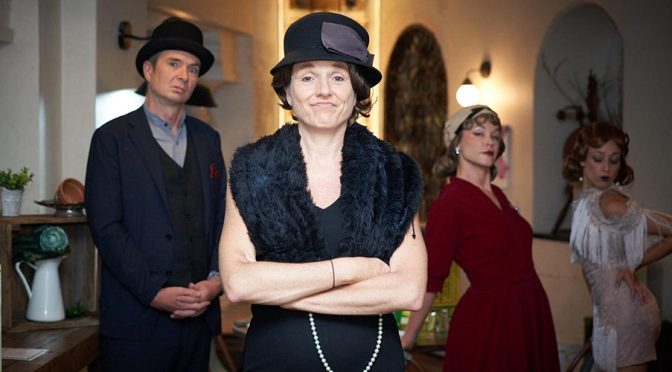 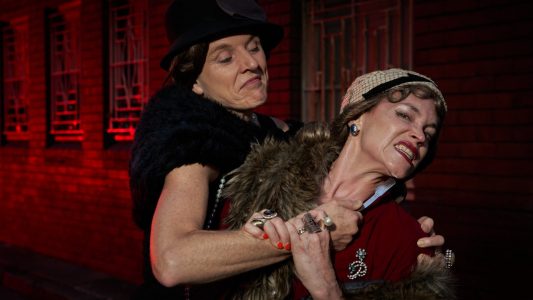 Wondering where to splash some cash for some flash entertainment and a good feed?

Mark your calendar for the last Saturday of the month – that’s May 29 for the chronologically challenged- as the appropriately named Silly Tart Kitchen presents an immersive theatre experience, ‘Battle of the Tarts.’

Descend into Sydney’s underworld with a story of two deadly enemies, Kate Leigh and Tilly Devine, criminal matriarchs of the 1920s.

Forget the Septics and their mythology of the Wild West, it was the Wild East as far as Sydney was concerned in the tumultuous Twenties of the Twentieth Century that brazen lawlessness sprouted, bloomed and prospered. In East Sydney, Darlinghurst, Surry Hills and Kings Cross variety was the spice of life – sex, sly grog, cocaine, the spice of vice.

Kate and Tilly ruled the area in a vice like grip- Kate with the illegal bottle, Tilly with the illicit brothel. They could have been allies but they were contemptuous and envious of each other, power divas each desirous of the upper hand.

Not afraid to say what’s on their mind, witness their wicked public tongue lashing of each other, a slanging match in purple prose, slinging and singing in hues of blue.

The show also boasts Sydney’s most expensive sex worker of the era, Nellie Cameron, a coked up mattress actress whose high stepping antics will astound you. Hang on to your grog, ladies and gents, its a head over heels exhibition charged with consorting with contortion.

Further astonishment is furnished by the mesmerising Snowy Mackenzie who might just steal your beer if you’re not quick enough. This card sharp is a shark and his sleight of hand disarming.

This quartet of characters are illustrative of the time when inner Sydney was financed by the spoils of illegal drugs and alcohol, prostitution, gambling and extortion.

With references to “the Battle of Kellett St”, the once blood flooded thoroughfare of louts and touts and mugs and tarts, what better venue than Kellet Street’s Silly Tart Kitchen to immerse yourself into the gory story of slashers and thrashers, pimps and pros, pushers and coppers written by performing cast member, Vashti Hughes taking historical references and cues from award winning author, Larry Writer’s book, RAZOR.

An hilarious and ribald night recreating this fascinating world in an experience served up with songs, shocks, dance, magic and debauchery. It may not be verbatim, but the verisimilitude is more than virtual, with vocal displays of cunning linguistics.

The immersive cabaret performance sees the rotating cast of characters entertain within Silly Tart Kitchen which has been separated into four unique spaces for the action to unfold. Each room will feature intimate, up-close performances throughout the evening.

What would be a visit to Silly Tart Kitchen without their renowned salt & vinegar potato scallops! You’ll receive them and lightly salted popcorn on arrival, washed down with a BRIX Distillers tinnie. Later in the evening guests will stuff their faces on a selection of cheeses, cured meats, house pickles, hummus and toasted flatbreads spread across shared style grazing boards.

The Bevy’s will also be flowing all night long, order at your leisure from the tailored drinks list featuring BRIX Distillers cocktails including ‘Potts Point Punch’ a mixture of spiced rum, coffee liqueur and espresso or the ‘Darlinghurst Grin’ white rum, maraschino liqueur, lavender syrup, lemon. There is Two Birds Lager on tap and a selection of other tipples on offer as well.

Tickets are now on sale , with the show to become a regular occurrence on the last Saturday of each month(next one May 29th). Tickets are $85 per person which will grant you entry plus a complementary BRIX Distillers tinnie on arrival, snacks, substantials and of course the Battle of the Tarts performance. Bargain!

In accordance to current COVID-19 guidelines, numbers are limited so you better get in fast! Silly Tart Kitchen will be selling tickets from a table of two up to ten guests per space.

Silly Tart Kitchen is located at 1 Kellett Street, Kings Cross and is open Tuesday – Sunday from 9am and in the evenings for private events. For further information, full program and to purchase tickets visit https://www.sillytartkitchen.com/
Keep up to date with everything Silly Tart via @sillytartkitchen #battleofthetarts