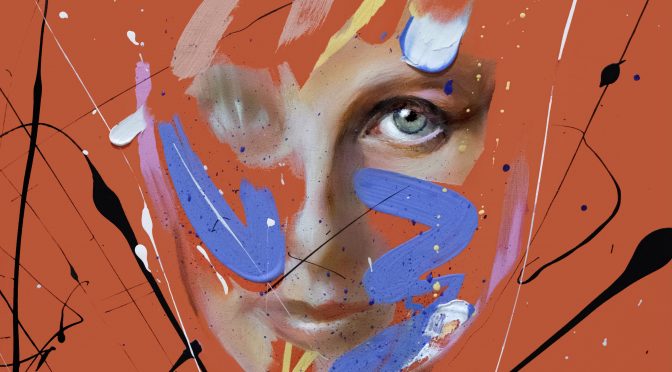 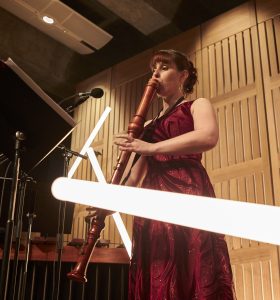 Australian recorder virtuoso Alicia Crossley has four solo CDs released. Her constant collaborations with other musicians and participation in ensembles continue to keep the profile of recorder playing in this country quite spectacularly alive and vibrant.

Crossley’s latest CD and concert venture, Bass Instincts, is an Australia Council for the Arts assisted project. Sporting another edgy titled album in keeping with her debut solo CD ‘Addicted to Bass’, this return to a focus on the bass recorder is a clever promotion of the instrument as well as seven local female composers.

Emerging from the challenges of lockdowns, border closures and an arts industry compromised, this project and especially the Utzon Room event is a heartening steady breath of fresh artistic air for audiences. It provides even more exposure for the bass recorder played at a blindingly virtuosic level.

The slick live performance part of the project included cool lighting effects in shifting colours for the airing of each new work. There was candid, intelligent and special commentary from the capable composers who could be present.

The general enthusiasm and open acceptance for new music in this all-premiere event is a welcome and much needed thing at this time. Coupled with the instantly endearing, chameleon eloquence of the bass recorder as ably demonstrated by this player, the project becomes a significant contribution to our current Arts environment.

The chosen female composers responded in highly varied style to Alicia’s open brief to provide new music for one of her specialty instrument. The bass recorder canon was much enhanced by this new and wide range of solidly innovative works. 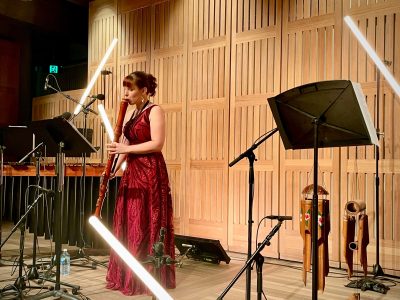 Alicia Crossley’s phenomenal versatility, communication with the crowd and modern recorder performance practice prowess were showcased across the range of ‘Bass Instincts’ works. Both the CD structure and concert event benefitted from the select line-up of  successive contrasts.

From composer Ann Boyd a composition Alhekulyele for recorder, voice and windchimes made  multitasking, triple threat demands on this capable performer which were easily met as an afternoon scene from Alice Springs and First Nations mythology were  evoked.

The programme began with Holly Harrison’s three-movement work, Sylvan. The inimitable swagger and ability to summon atmosphere of the bass instrument was an enjoyable start to the concert. It was the only live ensemble work, with Joshua Hill on well blended percussion.

Whether capturing in these two works a tantalizing, ticking groove  or the intensity of unique meditative effects from a foreign tonal system, the live recorder with electronics worked well in the venue. The chance to hear these tracks with headphones on the album version is also one to reserve for the future. I am keen for that.

Lisa Cheney’s Before You was a new-age lullaby/dedication to her first child for bass recorder alone. It catapulted intimacy and tender thought to this century with a newness of gesture and well paced reflection. It was a cavalcade of effect and timbre beautifully placed and coloured by Crossley.

A truly touching moment at the programme’s centre was the creation of the work Lost in the Darkness by Fiona Hill. Expanding textual fragments from poetry by an asylum seeker in detention, this offering for recorder and live electronics was a memorable moment.

Fiona Hill on sound desk and Alicia Crossley on recorder plus voice created scintilating oscillating lamentations here. The progressive, effective breath and keying effects manoeuvred by Crossley were stunning to witness here.  The work in live performance was a fine vehicle in which to transport us to the emotion and reality of modern cruelties. The agony of imprisonment was vividly painted for us.

This recording and performance project vibrates, breathes and sings on an incredibly high level. It entertained live at the Sydney Opera House launch event, bringing us close to the talented women in charge of such impressive soundscapes. These energies will endure as a significant Australian recording which defied the restriction of pandemic life on creativity and was launched with assured, forward-looking voice.

‘Bass Instinct’ the album and concert welcomed us wholeheartedly, inimitably back to celebrate innately excellent local musical instincts. It intoned feelings various in a voice only the bass recorder can provide. Be sure to look out for concerts in other cities. Also access the recording and experience it on repeat.