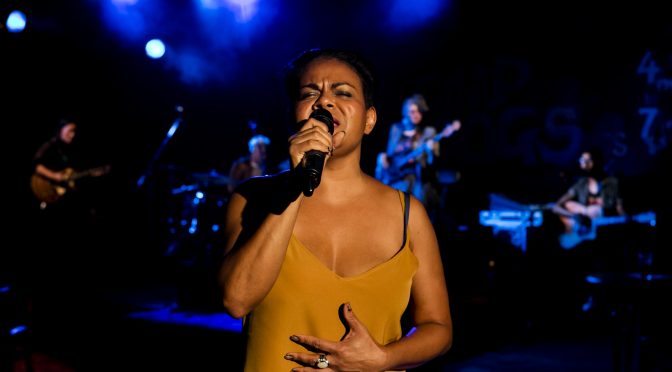 So … I went a few years ago to visit my friend who lives alternatively  in the bush.  Her life is subsistent but she makes a bit of cash as a feral pig hunter.  She is surrounded by dogs of all kinds.  Many of them scarred and scary.  Her advice to me, should I ever need it.  If there is a pack of dogs causing trouble, in the middle there will be a little one who is meanest, fiercest and smartest.  That one started the fight. This brings me to Barbara of BARBARA AND THE CAMP DOGS.

This play is written with that kind of gritty truthfulness.  Lived experience and unspoken lives collide in an explosive whipcrack over the heads of those who wonder and those who know.

Barbara is not averse to a beer and fight with someone bigger.  She’s mean, fierce and smart as shit. She is a singer living in Sydney and it’s a tough gig to find her place in the city.  Her sister Renee is also a singer, mildly successful, and Barbara’s port in the storm.  Together the two women are forced into a road trip to home town Katherine.  As we travel with them, scars are picked at and we see the wounds that make Barbara the feisty fighter that maybe the world assumes is all she is.

Ursula Yovich is extraordinary.  A dynamo, she co-wrote the text with the remarkable Alana Valentine.  Yovich and Valentine teamed with Adm Ventoura to write the songs (and Vicki Gordon on ‘Tick Sista’).  Then she flat out gives a soul ripping performance that absolutely shreds.

She and Elaine Crombie, who plays Renee, are masterful performers.  Their singing is beyond wonderful.  But it is their rapport allied with the way they handle the social realism of the themes and their artful expression of vernacular that carries the truth of the show.  Director Leticia Cáceres has designed a whole package of thoughtful, thought provoking theatre wrapped in an entertainment plus night of songs and drama.

Crombie brings such joy to her role.  With clear and consistent character, the empathy we feel for Renee is a testament to the detail of Crombie’s creation.  We all know a good girl who is ignored, abused and has to fight for respect.  So intimate is the writing, that Renee is not held up as some paragon, but is given an earthy reality that Crombie projects with a sexy-as-hell power and presence.

And it’s no mean feat to match Yovich’s powerhouse performance.  Words fail.  Texts were flying between myself and friends today about awards season.  Fingers crossed.  She is outrageously open yet despairingly cloaked and has, in two superbly interpreted sentences, the ability to bring every person in the audience to an understanding of the why.

BARBARA AND THE CAMP DOGS foregrounds indigenous issues with a humanity and grace in desolation that will, if you allow it, enrich and educate.  Without hitting you on the nose with a rolled-up dingo! The show is laugh out loud fun, with some hilarious audience interaction and a denouement that is heartbreakingly emotional.

And Yovich and Crombie’s relaxed relationship with the band is killer fun.  And wahat a band?  The Camp Dogs snarl and snap with brilliant musicianship and energy.  Jessica Dunn (Musical Director & Bass Guitar), Michelle Vincent (Drums), Debbie Yap (Guitar).  Such a considerable variety of songs to enjoy in this show as well. Blues and rock and ballads and there is a strong operatic feel to the solos in the later part of the show.  The band takes down their enthusiastic participation and discreetly underscores the emotional aspects of the rendering.  There is aria angst echoing through with the double bass.

And lordy lordy how I loved the mixing … best I have heard this year.  When that blues number began the show with just enough reverb to gut punch Yovich’s lower register into the space I just knew!   And the bass of the drum that sometimes comes through the feet without damaging the ears.  Oh momma.

The lighting too.  The homage to pub rock in the Parcans banked behind the stage (I miss them) and the gentleness in the rig.  It doesn’t glare or make itself obvious, it just subtly supports the onstage action and emotion, focusing attention without any loss of excitement.  There is one solo when there is an ever so slight slow pulse of light blue over the centre section of the audience that maintains the exhilaration of the show without destroying the loneliness projected by the artist.  Breathtaking.

The set is really well designed to give space and ambience.  Plus, it has a fun surprise upstage.  The costumes also are perfectly designed for both character and variety and there’s even a few costume jokes in there.  But a word about the make-up.  Thrilling in the extreme. The power of Yovich’s emotion is writ large in the face she wears after she hits bottom.  Brilliant conception. (Set Designer: Stephen Curtis, Costume Designer: Chloe Greaves, Lighting Designer: Karen Norris, Sound Designer: Steve Toulmin)

If I have one qualm about the production it would be the use of a trio in the ending. (Troy Brady joins the women.) I know why it is there and it is musically excellent.  However, despite my personal understanding of adoption and separation and a family disturbed, I really missed the circularity of the female energy in the climax.

BARBARA AND THE CAMP DOGS is encamped on site at Belvoir Theatre until 23rd December and it’s a scrappy little mutt that will pee on your leg.  Its hold on you sure to linger.

For more information about BARBARA AND THE CAMP DOGS visit:     https://belvoir.com.au/productions/barbara-and-the-camp-dogs/