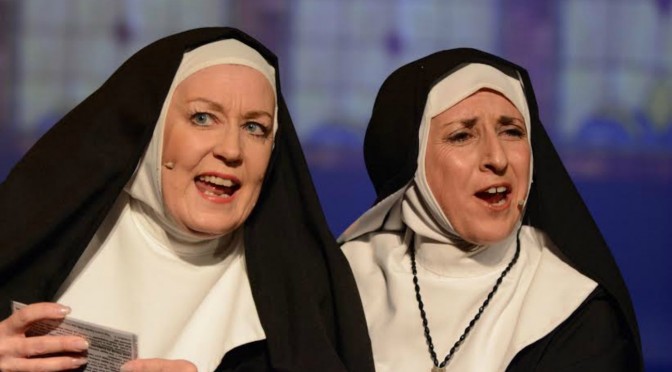 In our current world where a nun just won X Factor Italy and released a cover of Madonna’s “Like a Virgin” we are perhaps more than ready for Bankstown Theatre Company’s (BTC)  energetic revival of NUNSENSE. Benedicte, BTC for sprinkling fresh holy water from an almighty font of talent on this comedy classic. The ambitious Sisters of Hoboken staging a benefit to bury the food poisoned within their order are brought to life in all their individual glory.

There is a generous amount of show stopping unison amongst the twelve-strong cast. The Carmelites who demurely usher the crowd to seats quickly become devoted to the secular chorus line styles of strut, pose and shimmy. A traditional habit doesn’t leave much to view, so physical humour and strong gesture is always required at a nun’s benefit. The five lead sisters and their supporting group of ‘Sister Mary Melodies’ take control of the stage with obedience and diligence of dance move that give the stories and scenes great momentum.

The band as led by Musical Director James Court supports soloists and ensemble well across a variety of musical styles as well as being a part of the spoken exchange. The nuns’ habits are well-accessorised and transformed with props and other additions or manipulations. Headgear is tricky on top of a veil as are layers of the veil itself and some opening night wardrobe malfunctions occurred. However the overall comedic impact was not greatly hindered in these scenes.

The Reverend Mother and her four leads are all a triple-threat treat of the Trinity to watch. Leonie Johnson’s Reverend Mother, Sr Mary Regina, is a powerful leader with Cheshire cat grin and great comic timing. Sister Hubert, played by Katie Young, is a great anchor for the group. She excels when leading ‘Holier Than Thou’, the ecstatic striding finale.

Adele Gillies’ ballet-infatuated Sr Leo is a fun and engaging novice, who works well in solo, duet and ensemble groupings. Sister Amnesia- the nun with a secret past if she could only recall it- is played to perfection by Dale Selsby. This nun’s spoken and sung voice is an accomplished chameleon, a true godsend to the BTC convent. Her ‘I Could’ve Gone to Nashville’ is a showstopper.

Selsby’s Sr Amnesia is also an irresistible part of the successful audience participation with the assembled Catholics and those from other religions. Streetwise Sr Robert Anne, played by Melissa Goman is the pinnacle of ambition. All novenas are answered when she graces the stage with swagger and a voice which can communicate any style of story. This show’s thought-provoking change of pace which opens Act Two, ‘Growing Up Catholic’, is beautifully controlled and poignant in her hands.

NUNSENSE plays at the Bankstown Arts Centre this weekend and the next. The final chance to see the show is Sunday November 2.