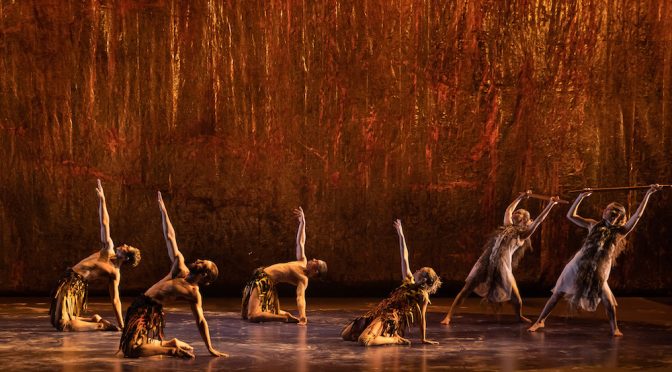 Warning:  Aboriginal and Torres Strait Islander readers are advised that the following article contains the name of someone who has passed.  The family of Ningali Lawford-Wolf has given the media permission to use her name.

‘Bangarra Dance Theatre’, founded in 1989 by American dancer, Carole Y. Johnson, evolved from both Johnson’s dance workshops in the 1970s, and the formation of the “Aboriginal Islander Dance Theatre” in the 1980s.

‘Bangarra’ is a Wiradjuri word meaning “to make fire”.

‘Bangarra’ has established itself as Australia’s leading cultural performing arts company and tours nationwide and internationally.

The company’s latest production, SANDSONG: STORIES FROM THE GREAT SANDY DESERT, is based on songlines, stories and knowledge from the Walmajarri people of the Kimberley region in Northern Australia.

With touching sensitivity and warmth, SANDSONG is a loving tribute to acclaimed performer, Ningali Lawford-Wolf.   A lifelong friend of the Page family and Frances Rings, she was a respected collaborator of Bangarra.  In 2019, Ningali and Stephen Page made plans to create a new work together, inspired by her Wangkatjungka family where she grew up, in the red pindan dust of the Kimberley desert.  It was about not only celebrating, but touching on the pain that forced them off that land.  Sadly, Ningali passed away only weeks later.  She would be proud to see her dream now very real and wowing audiences with power and passion at the Sydney Opera House.

The curtain rises to Jacob Nash’s red rock outback set, embellished with great lighting throughout by  Nick Schlieper.  What ensues is a mesmerising, historical journey of ancient rituals brought to us through modern dance.  Each of the four acts over 80 minutes has different stories, “Dry”, “Skin”, “Junta:  Women’s Traditional Bush Onion Dance”, “Totem”, and so on.

The dancing is wonderful and precise:  fluid like water, then rhythmic and powerful, like “Totem”, each dance different and special, enhanced by the superb costumes by Jennifer Irwin. The choreography by Stephen Page and Frances Rings was inspirational. They researched SANDSONG with the people of Fitzroy Crossing in the Kimberley, On Country.

The ensemble cast of dancers are truly faultless, they are so in touch and synchronised.  There is a common purpose that unites them – the power of their storytelling and love of country.

With the audio mix of Francis – the voice overs, humming, rhythmic singing along with the dream-like dancing, I was transported back to 1985, when we toured Alice Springs to Arnhem Land with the Marionette Theatre and NT Arts Council, and, as three women, we were invited to stay at the settlement at Papunya and were treated to a special dance by the women.  There is a spirituality that gets into your subconscious and stays there.

I would urge anyone who either loves Bangarra or who has never seen them perform to go along to the Drama Theatre at the Opera House and treat yourself to an enticing evening.

SANDSONG:  STORIES FROM THE GREAT SANDY DESERT plays at the Opera House until the 10th of July, 2021.