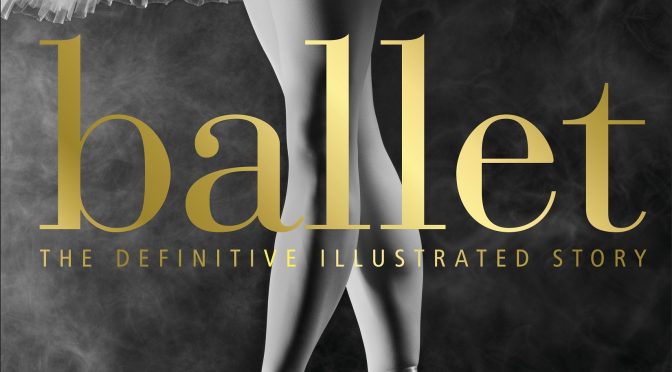 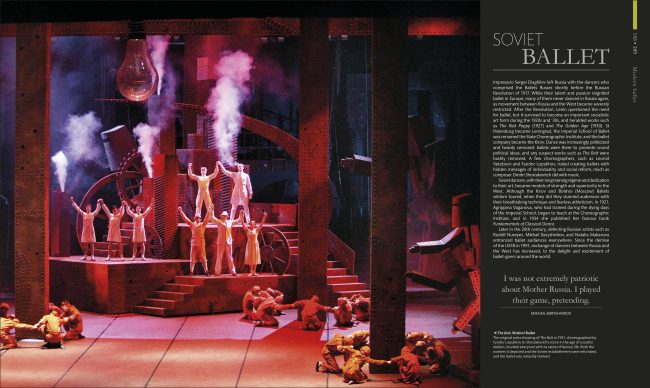 BALLET: THE DEFINITIVE ILLUSTRATED HISTORY. This marvellous book is a rather large and heavy coffee table/reference book that dance lovers will pounce on with delight.

With ballet legend Viviana Durante as Editorial Consultant , the book is divided chronologically into six sections, from the earliest historical performances through to current ones .It is clearly , simply and elegantly presented and lavishly illustrated. We are taken through the history of ballet from the earliest performances (Ballet Comique de la Reine etc ) right through to now with the latest cutting edge works of Christopher Wheeldon and others.It has an international coverage but concentrates on Europe and America.

Some of the major figures in dance history ( eg Lully ,Taglioni , Petipa, George Balanchine ,Sir Kenneth MacMillan, David Bintley , Anna Pavlova, John Cranko , Jiri Kylian ,Christopher Wheeldon , Mikhail Baryshnikov , Vaslav Nijinksy, Fonteyn and Nureyev etc ) – either choreographers or dancers are specially featured and placed in context with timelines and key dates and works mentioned . Some people are allocated a small photo and mention (eg the sad fates of Emma Livry and Giusuppina Bozzachi ).  Diaghilev’s Ballets Russes is majorly featured. For some of the major ballets ( eg Swan Lake , Giselle , Don  Quixote , Cinderella etc ) the traditional plot of the work is graphed and explained  and there are photos of various productions and yet other productions around the world are mentioned. (eg the many different versions of Giselle and Akrahm Khan’s contemporary version) . Matthew Bourne’s version of Swan Lake gets a special mention by itself and his Cinderella is mentioned but not shown . Graeme Murphy’s Nutcracker and Swan Lake are minimally mentioned.

It has a clear and easy to read Table of Contents at the front and a well researched glossary of ballet and dance terms and an index at the back. Also towards the back there are several pages of listings for both ‘Other Key Figures ‘( important people eg Maya Plisetskaya, Mikhail Fokine,  Antony Tudor , Russell Maliphant , Alessandra Ferri to name just a few ) and ‘Other Key Works’( eg Fall River Legend , The Golden Age ).

There are special segments on the technical aspects of staging a ballet (lighting , costume design etc ) – but no mention of Kristian Fredrickson , Jenny Irwin , Lez Brotherston, Loudon Sainthill or Karinska for example. Interesting segments are included on ‘character dancing’ , pas de deux and the return and rise of the danseur from around the time of Nijinsky . There is a special segment on ‘ ballet method ‘ ( Chechetti vs Vaganova or RAD or Bournonville etc ) but no mention of dance notation ( Benesh or Laban ).

Some of the major legendary venues around the world (eg La Scala ,The Met ,The Royal Opera House , The Paris Opera ) are featured in two page spreads .The Shanghai Grand Theatre and the China Arts Centre are profiled too. The major companies (eg Bolshoi, The Royal Ballet, Paris Opera Ballet, Marinsky , Nederlands Dans Theatre , New York City Ballet etc ) are all mentioned. There are special feature articles on Soviet ballet as well as ballet in China and America . Australia is considered worthy of some (small) attention : The Australian Ballet is mentioned as are Sir Robert Helpmann,  Graeme Murphy , Steven McRae and Gailene Stock . One of the contributors is Australian !The Sydney Opera House also is mentioned in a two page spread as one of the world’s iconic venues . However, New Zealand and the Royal Ballet of New Zealand only receive a miniscule mention if that.

BALLET: THE DEFINITIVE ILLUSTRATED HISTORY is a fascinating and beautifully presented reference guide that will delight ballet lovers and it would also be a great introduction for those unfamiliar with the art form. 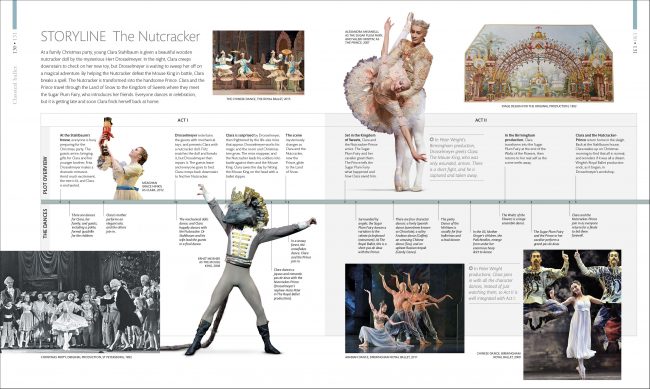