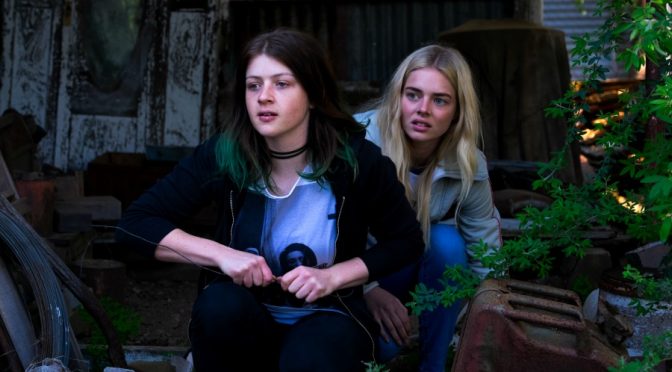 There have been 10 ‘teaser films’ released to herald the full Mardi Gras Film Festival launch on Jan 11th. Documentaries, romances, international films etc. all reflecting the lives, interests and passion of the LGBTIQ community.

“By widening our search across the most influential film festivals, as well as the key LGBTIQ festivals, we know we are bringing the very best of the best to Sydney,” explains Festival Director Paul Struthers. “Interestingly, we can now do this as more LGBTIQ characters and storylines appear in mainstream movies.”

BAD GIRL is one such. This is not a ‘lesbian film’. This is a cracker of a thriller in any context with a charismatic young woman at its centre and an equally compelling young woman circling her, their sexuality merely one element of their attraction to each other.

Initially they are opposites: dark and light, bad and good. They share intimacy and desire but not just for sex. The drug of bad behaviour, actual drug use and the equally addictive donning of protective personas bond them.

In the Mardi Gras Festival guide BAD GIRL is described as a ‘slow-burn thriller’. There is very little that a reviewer can share about this film as the terrific creeping script by Writer/Director Fin Edquist (one of the creator/writers of the excellent Jessica Mauboy vehicle SECRET DAUGHTER) slowly layers the mystery minute by minute.

In just the first 90 seconds of the film 3 intriguing questions present themselves. What is that sound over the opening titles? Cicadas, rain, bush background? What is this building? Industrial sports ground shed, Bauhaus inspired iron roofed squatting toad of a home? And why is this green haired, lip pierced young woman so sad?

The young woman in question is Amy (Sara West) and we see her initially behind some kind of reflective glass, in tight close-up, looking up away from the lens. The obfuscation continues as, with indie music ‘Heartbeats’ by The Knife in her earphones, she travels in the back seat of a car looking every inch the bored, ennui ridden , angst filled teenager who flips the bird to passing motorists for no accountable reason.

When the dark tunnel she sees through her window suddenly gives way to Australian treescapes passing by, there is a flash of the curious and interested side of Amy. The car nears that building so mysterious, and for just a frame or two, the projected stereotype cracks and a fearful, curious teenager looks around trying to see what is coming. And that is a different Amy.

With her parents Michelle and Peter (Felicity Price, Ben Windspear) she arrives at her architect father’s display home somewhere in the country. Blond, rosy cheeked Chloe (Samara Weaving) arrives on their doorstep almost immediately. Chloe is the same age and lives with her parents “a K back up the road”. As bad girl Amy plots her escape it becomes evident that Chloe is a rescuer swept along with her new friend but when she pulls a metaphorical thorn from Amy’s paw, the girls seem destined to be BFFs, lovers or both.

These characters are brilliantly portrayed. West never loses her truculence, nor Weaving her wide-eyed believability despite how Amy and Chloe grow and change. They are most often in close-up and the inner girl is as mesmerising to watch as the donned. Wonderful performances individually with able support from Price and Winspeare, who project just the right notes as the loving, frustrated parents. But the rapport between the young women is the momentum and heartbeat of the film.

BAD GIRL is a thriller and Director Fin Edquist negotiates the audience through the genre’s traditional story twists and plot reveals by having a series of mysteries slowly arrive. Allowing the viewer to be pulled from a sneaking suspicion to a fully accrued knowledge of what is going on. There are many ‘Oh shit! Shit No. Oh God. No No’ moments and the tension slowly ratchets up through to a taut finale.

In concert with accomplished production designer Emma Fletcher, Gavin John Head in his first IMDb credit as a cinematographer after a long career behind cameras, has crafted a visually taut film too. The shot selections avoid excessive high or low shots or panoramas with no point and the audience is grounded so that story and the characters are close and involving. The lighting and colours are slightly muted like the close up greys in a gum leaf. Pinks in cheeks and home décor and walls clash against the greens of water and grass and bush.

Well known composer Warren Ellis has scored films such as THE ROAD and THE ASSASSINATION OF JESSE JAMES in collaboration with Nick Cave. He plays and records with the Bad Seeds but it is his strings which are my favourite aspect of his scores, he played violin and viola on Marianne Faithful’s 2014 album. This film doesn’t disappoint. Though not actual strings, the spare soundtrack vibrates with both harsh and gentle and with the discordant and lyrical. The sound design by Ric Curtin combines with the music to heighten the drama and the chase scene is dynamic and scrambling. There is a sudden cessation of sound which provides one of the biggest shocks of the film.

BAD GIRL is a terrific choice by the Queer Screen curators of the Mardi Gras Film Festival. It’s homegrown, mainstream and with a confidently lesbian character at the centre of the story. All that and entertaining as hell!

Tickets for the first 10 films are on sale now including flexi passes to 5 or 10 films. Queer Screen members receive discounted tickets and priority entry to movies. To become a member or to book tickets visit queerscreen.org.au to book or call (02) 9280 1533.