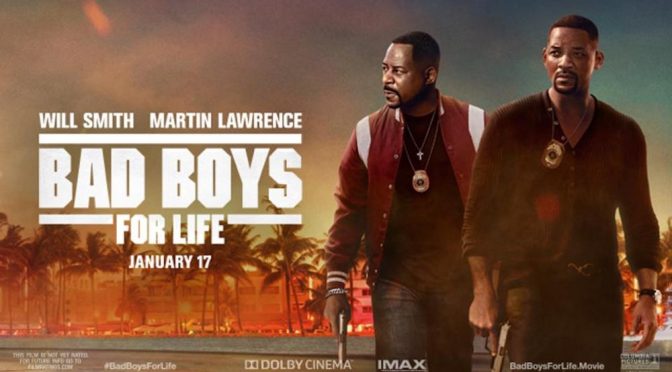 With these two and then newcomer director Michael Bay in the director’s chair and producers Don Simpson and Jerry Bruckheimer at the helm, you have the action buddy film of the 90s. Despite not even making the top ten of the highest grossing films of that year, barely scraping in at $141 million, it became a big hit and spawned a popular soundtrack, a very average and let down sequel and now, the long awaited third instalment, Bad Boys For Life.

Like Disney, Paramount is dusting off its film catalogue, finding what it can remake, add a sequel to or repackage. Top Gun 2 is out later this year and a fourth Beverly Hills Cop is not far away. BAD BOYS FOR LIFE takes place 17 years after the second film.

For the Third Act, our favourite bad boys return as the two Miami detectives, albeit slightly older. Marcus (Martin Lawrence) wants to retire and be with his family more, now that his daughter is married and has her own child. He encourages Mike (Will Smith) to do the same and let the younger take over the police unit.

All of that is about to change when the film’s main villain, a widow of a Mexican drug lord, and former lover of Mike, played brilliantly by Kate Del Castillo, who with the help of her son, Armando (Jacob Scipio) has escaped from jail, put there by Mike. Together they will stop at nothing to seek revenge.

Also returning to the screen is the pair’s stereotypical boss, Captain Howard (Joe Pantoliano). Paola Nunez joins the ranks as Rita, a former girlfriend of Lowery’s and in charge of the new Miami police tech unit along with a team of new tech kids, making the Mike and Marcus feel even more redundant.

Michael Bay who directed the first two films was absent, letting the young foreign born Adil El Arbi and Bilall Fallah take the helm. They will be  following in the late Don Simpson footsteps as well for they will be directing the new Beverly Hills Cop.

BAD BOYS FOR LIFE is  everything you would expect from a Will Smith/ Jerry Bruckheimer production – from its ridiculous stunts, chase scenes, the camera techniques and the amazing score set by Mark Mancina down to the comic relief and serious moments. Bad Boys For Life was never going to be as as Lethal Weapon or 48 Hours set out to be but “What are you gonna do?” Hopefully the next sequel and yes there will be another one won’t take another 17 years to wait for.

BAD BOYS FOR LIFE is now in cinemas