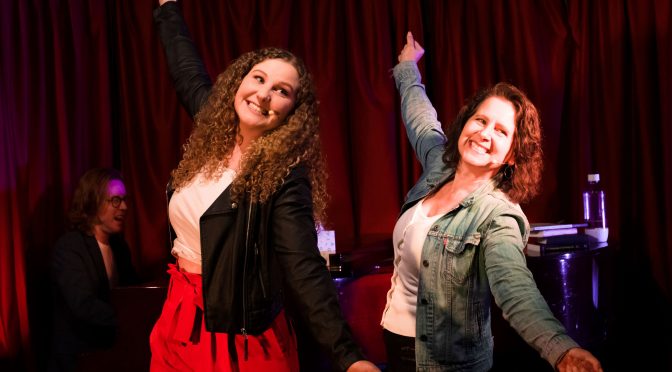 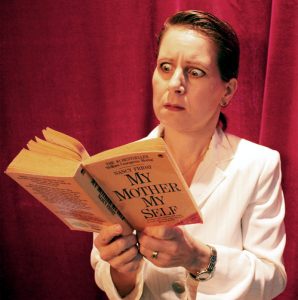 The ever wise and poetic Lebanese writer Kahlil Gibran wrote in his classic collection  of essays an essay on children. it starts:

‘Your children are not your children. They are the sons and daughters of Life’s longing for itself. They come through you but not from you. And though they are with you yet they  belong not to you. You may give them your love but not your thoughts. For they have their own thoughts. You may house their bodies but not their souls. For their souls dwell in the house of tomorrow, which you cannot visit not even in your dreams.”

I would suggest that Maria’s alter ego would not have returned to M.A. (Mothers Anonymous) after her original show M.A. which played in 2011 at the Newtown Theatre if she and her mother had received such wise counsel.

Maria again plays the lead character. This time in the 12 step M.A. group she is not only still dealing with issues in  relation to her mother, even though she tells us she left home some twenty years ago and has just turned fifty, but is also contending with issues in regards to her relationship with her own grown up daughter, (fictitious of-course), who wants to break free from her mother’s clutches, played by the delightful Esther Monck.

The show relies on the conceit that we in the audience are fellow  members of the M.A. group and in simpatico with her. The twelve steps are gone through one by one and once the twelfth step has been completed mother and daughter make peace and lead the audience in an invigorating rendition of the popular Italian song Volare.

A cabaret isn’t worth anything without music.  The show comprises eleven songs which are reworkings of popular songs. De Marco and Monck are accompanied by the mellifluous tones of pianist Andy Freebom. The performance is  well directed by Simon Ward.

This was a clever, quirky and warm hearted show to savour as winter takes hold in Sydney.