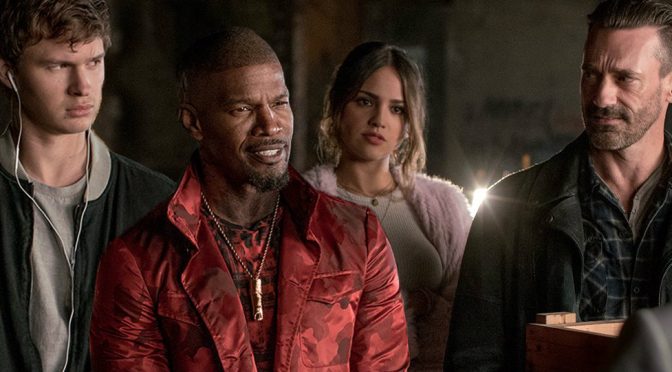 This full throttle thoroughbred is a mash up masterpiece – think Drive out of LA LA Land, a motor musical, a heist feist pedal to the metal toe tapping genre fender bender!

A good kid and a devil behind the wheel, Baby is a getaway driver for criminal mastermind, Doc.

Suffering tinnitus after a tragic traffic event that left him orphaned, Baby is permanently plugged into an Ipod, of which he has an array. On any given caper, he chooses his own personal soundtrack that fuels his feel with the wheel and gets his engine running.
He’s a chivalrous chauffeur and master of the chase, the cheer of steer, an exhilarating accelerator, a master of car-eography!

As stated, BABY DRIVER plays like Drive out of La La Land, but there’s no Gosling in sight, instead we have Ansel Elgort behind the wheel and firmly in the driver’s seat, as deft at the brake and clutch as the dip and twirl. It’s a performance that fires on all cylinders.

As his employer, Doc, Kevin Spacey exudes cool malice and a droll turn of phrase.

Partners in crime include Jamie Foxx as a chip on both shoulders potty mouth and John Hamm and Eiza Gonzales as a Bonnie and Clyde couple of cool chic and deadly desire.

Baby has his own love interest, a sweet, kind-eyed diner waitress named Debora delightfully and deliciously played by Lily James.

Written and directed by Edgar Wright of Shaun of the Dead and Hot Fuzz fame, BABY DRIVER delivers the “playfulness of danger” in spades, a shovelling of the thrills, spills and chills that will have you squealing, screeching and cheering as the shock absorbing caper gains a pace from the get go and never eases the throttle.

A character in the film remarks that they thought Baby was retarded. Doc puts them right. Retarded, he says, means slow. And that ain’t BABY DRIVER at all.