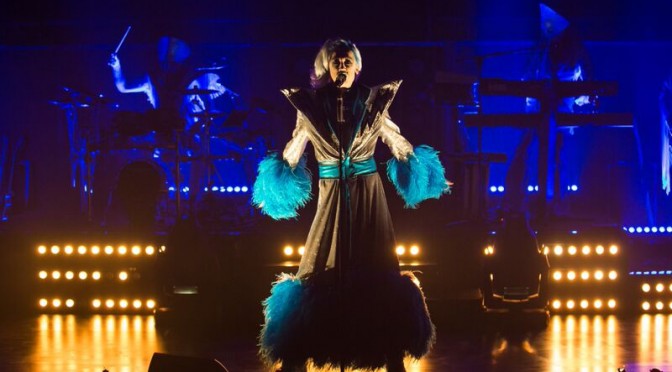 The somewhat confusing and convoluted plot concerns the story of a young woman, Rachel (Blazey Best), who has a mass of problems and challenges including an unhappy relationship with a fiery-tempered husband played by Ashley Lyons. In order to cope she manufactures a kind of fantasy world to slip into.

In this world she reigns supreme as the gender bending glam rock superstar, Clifford North played by iOTA. Rachel’s two worlds do not go together well.

At times the show is very dark with allusions to domestic violence. There is also social and political comment in some of the songs. At one point in the show North gets into philisophising, pondering the meaning of the chorus lyric to Kris Kristofferson’s famous song- Me and Bobby McGee-  ‘freedom is another word for nothing left to lose’.

The narrative is told in domestic vignettes acted on the forestage, yet when the band jumps in and iOTA appears there is little attention to storyline.

The production has little dialogue, the show often seaguing seamlessly from song to song, reinforcing the feeling that this is more a concert than a musical.

The exuberant, almost overwhelming energy from the cast is  impressive.

There are plenty of amazing, dazzling special lighting effects,– at times the stage is gently dappled. At other times it is blinding with a rock concert look.

The set comprises mostly the stage for the quartet of sensational musicians, and then a slightly raised stage- three steps- for the huge and the huge lighting and sound rig. There is also a platform that rises and a window, table, chairs and lamps, at either side of the stage, representing the ‘real’ world.

The band is brilliant. They are all dressed in white costumes- think late Elvis- and wear bizarre long hooded masks. A Kabuki style influence can be seen in the use of blue ribbons as tears from the eyes. There is a sizzling hot electric guitar solo and the keyboard player also deserves special mention.

As Rachel, Blazey Best gives a dazzling performance. She is already on stage as the audience comes in to take their seats. She is acting enigmatically, crouched in an armchair, alone in the room. As the house lights dim she walks slowly across the stage to turn on a light.

As rock god Clifford North iOATA is amazing . He struts, prowls, prances and poses chameleon like in his blue and silver suit with ostrich feathers. Other features of his appearance are his eerie blue make-up, his tattoos, his high platform boots and his white wig with blue streaks.

B-GIRL  runs at the Playhouse until the 21st June.

For more about B Girl, visit http://www.sydneyoperahouse.com/whatson/b_girl_2015.aspx?gclid=CPX59IWHgsYCFdgnvQod9YwAkQ