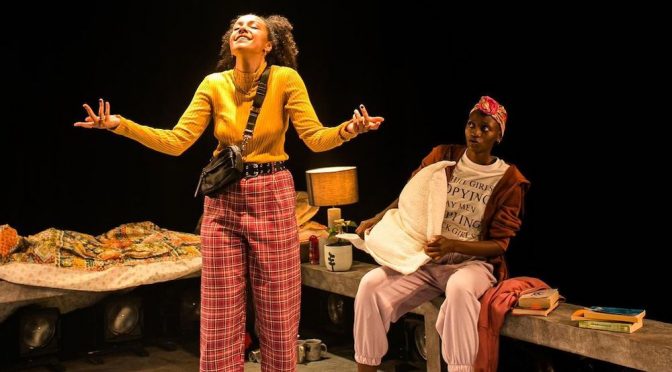 This unusual piece of theatre was performed by Vivienne Awosoga (Kara) and Moreblessing Maturure (Cleo). Both are women of colour – I share a Zimbabwean heritage with Moreblessing. Much of the play resonated with situations and expressions that I could identify with.

I was told that the show would probably be musical, being at the Eternity Theatre venue, however apart from the steady rap like delivery of lines at the beginning of each of its seven parts, the show was a play in style. It was ninety minutes long, and without interval.

The show’s structure was ingenious, and based on virtual twitter conversations developing from Cleo’s imaginary hate campaign against a white billionaire online influencer, Kylie Jenner. Using the anonymous text of twitter (including emoticons and GIF files) as script for stage dialogue allows pitched excitable dramatic speech, blending avatars with real characters. This was a great technique. END_OF_DOCUMENT_TOKEN_TO_BE_REPLACED