This dark satire looks at the age old concern of trying to find yourself when you have so many insecurities and are unsure of yourself,  or your place in this crazy world. END_OF_DOCUMENT_TOKEN_TO_BE_REPLACED 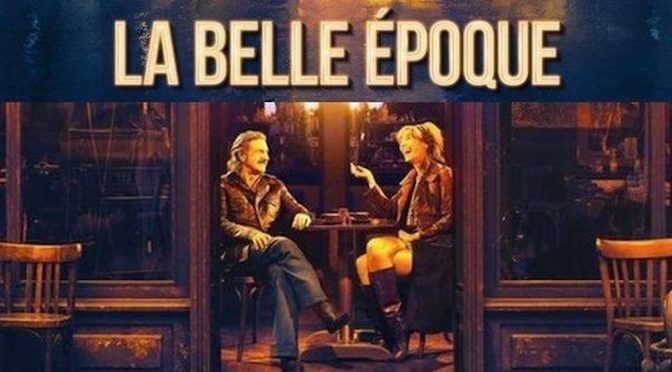 LA BELLE EPOQUE (A Beautiful Era) is a charming, funny, fantasy, in a very French way.

Sixty year old Victor(Daniel Auteuil) is a technophobic out of work cartoonist. Marianne (Fanny Ardant) his wife for over 40 years is a seemingly ‘modern’ woman, who in exasperation, throws Victor out of their marital home. This action starts a chain of events, where both both fact and fantasy  are relived.

‘Time Travellers’ is a historical re-enactment company owned by Antoine(Guillaume Canet) a friend of Victor’s son. A gift voucher for ‘Time Travellers’ allows Victor to relive his original wonderful meeting with Marianne, on 16 May 1974 in a bar in Lyon. The situation goes somewhat array when Victor falls for the actor Margot (Doria Filler) playing the part of his future ‘wife’. To further complicate matters, Margot is also Antoine’s lover.

The movie is beautifully filmed. The sets, especially in the re-enactment scenes are marvellous and capture the periods conveyed with great accuracy. For fans of nostalgia and also baby boomers – the 1970’s re-enactment provides a complete trip down memory lane. Wonderful songs and music from the era is played throughout, fully evocative of that ‘hedonistic’ period.

Excellent performances by all the lead actors, but especially the characters played by Auteuil and Tiller. There are many smaller parts – all are charmingly executed.

Fantasy, nostalgia and reality collide and intertwine, with the result that ‘La Belle Epoque’ is an entertaining and heartwarming French film.