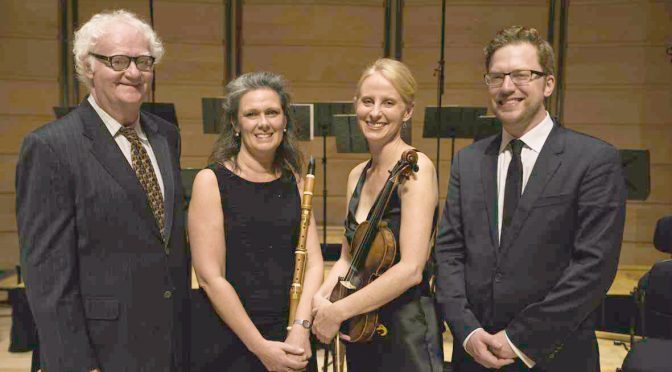 Established in 2013 by Richard Gill AO, Rachael Beesley, Nicole Van Bruggen and Benjamin Bayl, the Australian Romantic and Classical Orchestra (ARCO) has adopted a thematic approach to its repertoire. This was exemplified by its recent concert Italian Romance at the City Recital Hall  which featured works by Beethoven, Hugo Woolf and Mendelssohn.

In the first half of the program the Orchestra was a smaller ensemble and stood. Beethoven’s Corialanus Overure was a particular choice as an example of Romantic Music. The work is not based on the Shakespeare play but on the equally gruesome story of a Roman General. The piece was played with precision and wonderful rhythm by the Orchestra. It was very much a  ‘Sturm and Drang’ experience.

Beethoven’s Romance for Violin and Orchestra No 2  featured Rachel Beesley as the soloist. Beesley played with tenderness and warmth, and created a wonderful dialogue with the woodwind section.

The next work which the Orchestra played was Beethoven’s 12 Contradances for Orchestra. Most of the Contradances were just 32 bars in length and the Orchestra glided through each dance to create a seamless whole. The joyful music was however made more poignant with Gill reading out extracts from a letter which Beethoven wrote to his brother about his impending deafness.

The Orchestra’s performance of The Italian Serenade by Hugo Woolf featured a delightful conversation between the violin and cello.

The Orchestra reconvened after interval with a larger ensemble and delivered an impressive performance of Mendelssohn’s Italian Symphony. The remarkable, glorious wall of sound that this Orchestra achieved was in spite of the fact that it was about half the size of a full Orchestra.

The success of  this pleasing concert can also be attributed to the concert’s guest conductor Benjamin Bayl. His relaxed yet disciplined conducting brought out the best in the Orchestra.