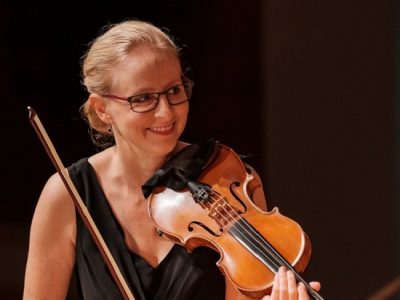 Like many performing arts groups, Australian Romantic & Classical Orchestra recently returned to the live stage following 2020’s reduction of performances to a safe distance via streaming only. This return to live music making across four venues in NSW and Victoria brought the popular orchestra back to audiences  like we have not seen them before.

This orchestra’s typical excellence of interpretation, crystal clear articulation and superb string orchestra blend was in evidence during this vibrant comeback. It saw the orchestra’s dynamic voice speak in Historically Informed Performance accent whilst discussing later works than we are usually treated to in their concerts. The chance for Australian Romantic & Classical Orchestra musicians to accompany a vocalist was also a rewarding change.

Another stunning addition to this live event was an arresting stage design by James Browne Presents. Emphasising the twentieth century slant of a lot of the programme and the compositional dates of works by Max Bruch and Benjamin Britten being close to the start on both World Wars, the stage was swathed at a height by suspended parachute fabric dropping down towards the musicians. This sheer fabric was lit with subtle rosy effect. There was  equally beautiful lighting design employed around the stage area to depict a calm village scene about to be illuminated by all the shockingness of war.

Orchestral black dresses were also complemented by musicians in white shirts, black pants and braces. This was an effective costuming for the also effective opening fanfare/march (CPE Bach’s March-For the Ark Wq.188) played by the period brass and timpani of this orchestra.

Marches continued in the colourful Serenade for Strings after Swedish Melodies (1916) by Max Bruch. Expertly characterised, articulated and never overplayed, this clever work with vivid vignettes was very nicely rendered. With streamlined interplay between string sections of the orchestra, the symmetry of march-slow-fast-slow march unfolded in broad strokes and with great respect for Bruch’s post-Romantic narrative.

The highlight for me of this dramatic programme was a stunning leap forward in time to the music of Benjamin Britten. His setting for soprano and string orchestra of Rimbaud’s sensual and luscious poetic extremes in Les Illuminations Op 18 (1939).

The complex French texts and shifting characters in movements full of instrumental and vocal fireworks were consummately conquered by this orchestra and lithe voice of soprano Jacqueline Porter. The momentum was terrific here, in a dense setting that could be less than slick in the wrong hands. The illuminating and bristling delivery smashing this orchestra’s mission statement to ’Inspire-Educate-Enlighten’ comprehensively in the one work.

Founding Artistic Director the late Richard Gill AO would be looking down from well above the Angel Place parachute set with pride at such a rewarding snapshot in music history as the English compositional style was turned on its head by the virtuosic Britten. He would be thrilled with the inclusion of Britten in the musicological presentation, as well as the bold swoop of this performance.

Britten bookended by inimitable and varied dramatic scenes from Max Bruch and Tchaikovsky with student rush tickets on offer also would satisfy the agenda of this late and great musician-educator as well as the young but firm tradition of excellent programmes  from this compelling musical group which never disappoint.

Director Rachael Beesley led the string band with energy and enthusiastic choreography of nuance. Her direction of gesture as the Australian Romantic & Classical Orchestra played Tchaikovsky was brimming with the signature startling freshness we have previously discovered in versions of the earlier Mozart and Beethoven.

Throughout the four movements of Souvenir de Florence Op 70 from 1890 Beesley pushed the group to produce a lush powerhouse sound on their period instrument imbued with warmth and control, which would make orchestras with more modern instruments green with envy. Or at least rethink and search for ways of creating a similar depth of sound and agile approach to maintain Tchaikovsky deep need for expression with such clear and colourful punctuation.

This concert series, with beautiful modern fullness yet clean trajectories for the rendering of composers’ development of ideas, was supported by the usual fascinating ‘Voyage of Musical Discovery’, with Rachael Beesley and Nicole van Bruggen leading the musicological discussions. A contrasting contemporary work by saxophonist Nick Russoniello was used to further extend the illustration of motivic development in music from the late-Romantic palette and later.

The Australian Romantic & Classical Orchestra performs its next series of concerts, ‘Evoke’ with works by Beethoven and Berwald from Anzac Day. Following this exploration thematic development in late Romantic works, these earlier chamber music works in HIP guise will be equally unmissable.