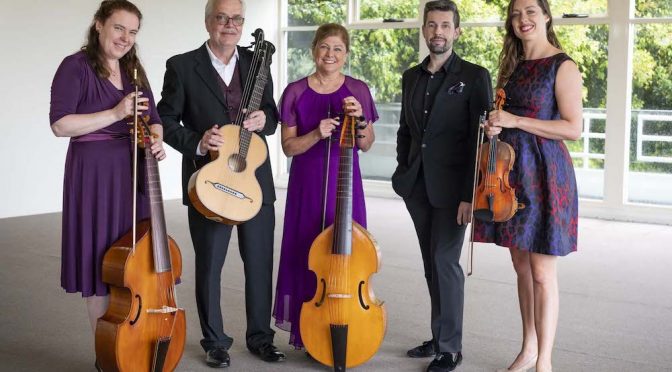 The Marais Project – an early music ensemble – is releasing  a brilliant and typically eclectic new album this month: AUSTRALIAN MONODY. And it will celebrate the launch with a concert PRECIOUS COLOURS at the Independent Theatre North Sydney this Saturday afternoon 7 May!

“For an ensemble that tends to play early music, this album really did come from a different place”, says Eriksson, the founding force behind the ensemble.

The initial inspiration came from composer Gordon Kerry. He contacted Eriksson to say he had financial support from the late Marena Manzoufas to write a piece for the Marais Project which he titled ‘Christchurch Monody’, referring to the massacre in Christchurch, New Zealand. The ensemble already had ‘The Aboriginal Mother’ by colonial composer, Isaac Nathan, in their repertoire. This song explores a similar scenario: the infamous 1838 Myall Creek Massacre of people from the Wirraayaraay clan.

Gradually the idea formed for a whole album of Australian songs, plus a sprinkling from overseas – all sung by Australians.

As the production journey continued, Eriksson realised that an underlying theme was emerging. “All the music reflects on light and darkness, love and loss. Carl Vine and John Dowland, for example, write beautifully about the tenderness and melancholy of love, while Purcell, Gordon Kerry and Isaac Nathan reflect on human tragedy.”

A welcome guest on Australian Monody is leading countertenor, Russell Harcourt who contributes several solos and duets with soprano, Susie Bishop. Historically, the rich sounds of the viols have blended especially well with the countertenor voice, and Australian Monody is no exception. Alice Chance rearranged her choir work ‘Precious Colours’ for the ensemble with Harcourt in mind, as did Eriksson and Tommie Andersson in the original arrangements they made for the release.

Alongside conventional options, the album will also soon be available in a special Dolby ATMOS mix, the first time The Marais Project has made use of this new recording technology.

Sydney Arts Guide has 3 copies of their new compact disc AUSTRALIAN MONODY to give away. Email editor.sydneyartsguide@gmail.com with MARAIS PROMOTION in the subject heading and your postal address in the body of your email. Winners will be advised by email.