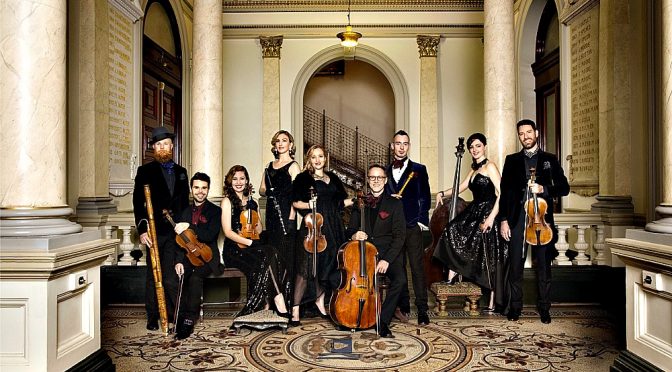 “All the jolly chase is here
With hawk and horse and hunting-spear,
Hounds are in their couples yelling,
Hawks are whistling, horns are knelling…”

The Australian Haydn Ensemble is garnering an iconic reputation as one of Australia’s best chamber music performers.

Their performance last Sunday of works by Haydn Mozart Janitsch was a sell out event. It was held in the Utzon Room of the Opera House..an intimate setting looking out past the opal blue bay of Farm Cove towards Mrs Macquarie’s chair.

The program derived its inspiration in part from the 18th century fascination with the Hunt, in particular Haydn’s Op1 No.1string Quartet “La Chaisse”. Also in the program was an Oboe Quartet in G Minor By Johann Gottlieb Janitsch, an eighteenth century German Composer whose prolific output of chamber and orchestral symphonic works is beginning to be recognised.

The performance featured some some sterling performances by its members..in particular violinist Simone Slattery whose playing with a baroque bow and  infectious enthusiasm breathed life and vitality into both the Janitsch and the Mozart String Quartet. Anthony  Albrecht’s cello playing gave the concert depth and incisiveness. Mozart’s Oboe Quartet, composed to show off the virtuosic talents of his friend Friedrich Ramm, was effortlessly played by Amy Power, indicating the profound evolution of the instrument and its technique over the past few hundred years. The Janitsch was a moody and reflective work, interesting and quite uncharacteristic of the era.

The occasion also was one of maternal celebration for Skye McIntosh the founder and Artistic Director of the ensemble, who had recently had a child…coincidentally as pointed out by the cellist Anthony Albrecht, both the string quartets the ones by Haydn and Mozart which buttressed the program, were in b flat major, a key said to reflect hope and optimism  …a motherhood key!