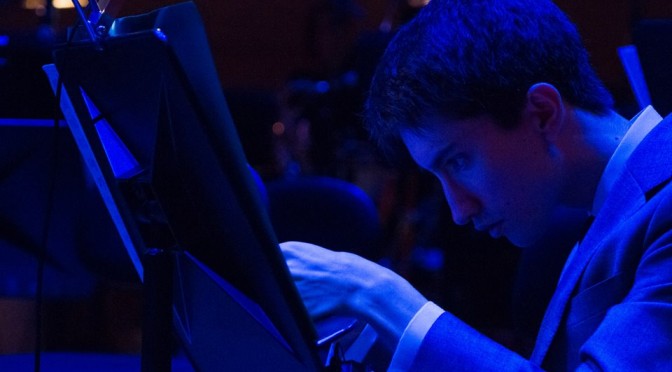 This HUGE epic performance will leave you reeling with exhaustion and euphoria. Boldly ambitious and sweeping, for this extraordinary concert the Australian Chamber Orchestra attempts to follow the entire history of music in an evening (42,000 years of music in roughly two and a half hours by a blending of an expanded chamber orchestra, six vocalists and two electronic musicians).

Linked in with the VIVID Festival as well, this was an astonishing , ravishing concert. Directed by Ignatius Jones it also featured electronic duo The Presets who are returned to their classical music roots.

The concert also included engrossing visuals , devised by Digital Pulse, on a huge screen all appropriate to the music of the period – ranging from fire, ancient Greek amphorae, illuminated manuscripts, Hildegard von Bingen ‘s visions, glorious stained glass windows and through to Botticelli , Breughel , Holbein, Leonardo and Michaelangelo , Dada , Constructivism , Socialist Realism , Pop and Abstract art and everything in between.

The ACO were in fine, fiery fettle under Tognetti’s emphatic , enthusiastic leadership. The first half followed the development of music from basic rhythm to awed veneration to expression – or if you like, from the physical to spiritual to personal – and return.  It took us from the ‘big bang’ of creation through to 1900 with electronic static noise , ancient Aboriginal music, ancient Greek and Persian themes , through to Medieval and Renaissance songs (for example Hildegarde and Henry VIII ), through to the Baroque ( Vivaldi, Handel et al ) and then the greats of Western Classical music –Mozart , Beethoven , Bach , Wagner, Montiverdi.

Brahms and some of the Romantics were also included and a fair chunk of it is religious music ranging from Gregorian chants, thrilling chilling Byzantine rhythms etc. There were also negro spirituals and a field call .The Montiverdi vespers was explosively powerful , the Vivaldi Gloria exultant and vibrant. The first half ended with the haunting , passionate ‘ Transfigured Night ‘ by Schoenberg with rather lyrical visuals of a tree and moon.

Act 2 took us from 1900 to now, included jazz, Stravinsky, Shostakovitch, the difficult atonality of Webern, spiky Bartok, lyrical , delicate Barber, Janacek , harsh Weill… As another of my colleagues has said the second half was circular- form into chaos into form into chaos again repeated. The second half perhaps was more laden with quick, spotty samples, and it also reflected the impact and influence of recorded sound on composition.

An old fashioned looking ‘portable gramophone’ was installed front and centre and amplified the recorded music. There was a quick jump between the war years and the Great Depression with incredibly moving images of bombed buildings, the endless queues to a jazzy background (a very’ hot ‘ saxophone and clarinet by the way) .

After 1945 we hit the infamous Cage 4’33” and then it’s a quick whiz through Dylan, the Beatles, Bowie leading us to Flower Power, protest songs and the Vietnam War. Does a drill really count as music? Ask Eisnturzende Neubaten. We are then catapulted forward through the Beastie Boys, Bjork,Britney Spears, Kylie Minogue, Madonna, Eminem etc, interlaced with Peter Sculthorpe, Phillip Glass, Amy Whitehouse among others, ending with music right now.

This all segued into a short encapsulating and summing up piece , ‘Continuum ‘ which had fireworks /exploring Japanese like space/universe visuals that left both the audience and performers gasping.

‘Life flashes before your ears’ indeed .Or, as Ignatius Jones puts it in the program : ‘A history of Western Music in Two Acts and a Megamix’ . A dazzling, epic performance by the ACO, – an extraordinary knockout concert that will leave you breathless and wanting more. This major landmark concert is a visual and aural feast.

The ACO in ‘Timeline’ is playing at either City Recital Hall Angel Place or the Sydney Opera House 20 -28 May , then tours nationally . Running time 2 hours 45 (approx) includes one interval

For more about The Australian Chamber Orchestra : Timeline, visit http://www.aco.com.au.

One thought on “THE AUSTRALIAN CHAMBER ORCHESTRA: TIMELINE”