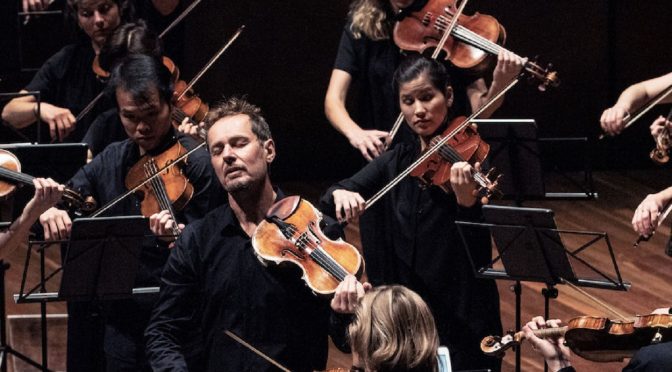 A glorious concert with magnificent performance by the ACO , led by Richard Tognetti and Croatian -born soloist Dejan Lazic on piano , focusing on music mostly by Mozart and showcasing the ACO’s great strengths as well as exploring the “Sturm und Drang” style . The Orchestra and Lazic had a great rapport.

HAYDN ‘s Symphony No.39 in G minor ‘Tempesta di mare’ began the concert The first movement with its brisk strings and robust circular melody that was looped and repeated and listen out for the horns featured. The second movement was an elegant lilting dance like movement while the third movement with its horns and woodwind was a cascading wall of pulsating sound .The fourth and final movement was scurrying with its flurried , impatient strings. Throughout the work there were contrasts in mood and at times quite sharp , spiky rhythms that made the work sounds very fresh and contemporary.

MOZART’S Rondo Concertante (arr. Dejan Lazić) in its Australian Premiere we heard the piano played by Lazic with a delicate graceful touch , crisp and precise that sparkled and rippled in a glorious bravura display – a most interesting reworking of a piece that originally contains a cadenza but here adapted for piano.

MOZART’S Piano Concerto No.14 in E-flat major was given a ravishing performance by Djan Lazic. In the first movement the orchestra was robust and listened attentively to Lazic on piano as he delivered a showy rippling cascade of flourishes of scales that were at times like snowflakes. The second movement had slow stately strings with a rich , lyrical and impassioned piano with answering pulsating strings while the piano ripples surges and throbs.In the third movement with its brisk opening Lazic on the piano was jaunty and bouncy , leading to an enchanting discussion the piano leaping animatedly all leading to the fast , teasing ending.

After interval Tognetti led the Orchestra in MOZARTS ‘s Violin Concerto No.3 in G major , one of Tognetti’s signature pieces. Tognetti was dizzying and impassioned in his fearless performance full of panache and finesse , lyrical and eloquent , leading the Orchestra in the circular melodies.

The final work , MOZART’S Symphony No.25 in G minor ( yes as used in the movie Amadeus and inspired by Haydn ) was terrific , the first movement with its insistent dramatic opening and featuring the clarinet .There were flurries from the Orchestra and the woodwind was dynamic and pulsating. The second movement was deep rich and flowing , the third had a startling , emphatic statement of the melody and the Orchestra split into two halves in a away taking turns to repeat the theme. Skittering woodwind stated a different melody before everyone returned to the first major one. The final movement with very strong strings was fast and whirling taking us to a stertorous conclusion.