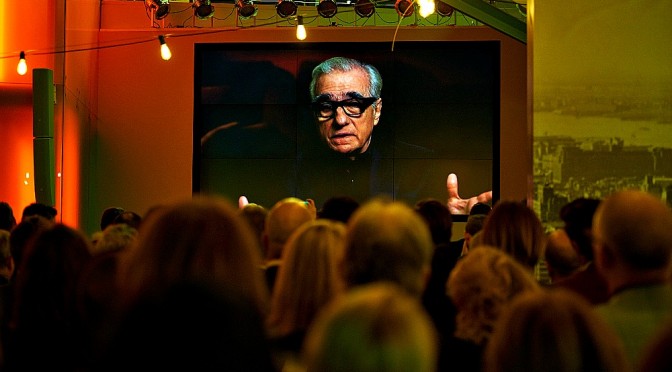 The Martin Scorsese exhibition is in Melbourne, celebrating and showcasing the body of work of one of the world’s most renowned filmmakers.  I went to the exhibition’s opening, keen to  learn more about this great American filmmaker.

From the dark, gritty streets of New York City in Taxi Driver, to the boxing ring in Raging Bull, to the biblical surroundings in The Last Temptation of Christ, Martin Scorsese continues to wow audiences in an amazing career spanning nearly six decades.

He was part of the New Hollywood generation, also known the American New Wave that originated in the early to mid-1960s and comprised of Francis Ford Coppola, Steven Spielberg, George Lucas and  Peter Bogdanovich. This was the generation of young filmmakers who were the first to grow up with television, be influenced by European cinemas, experience the counterculture of the early 1960s, were film school-educated, young, and energetic and ready to make their own mark on the industry.

Hollywood was slowly moving away from its traditional studio system and shifting its focus on the director and writer.

Now showing at the Australian Centre for the Moving Image (ACMI) is the Martin Scorsese Exhibition.

I spoke to Fiona Trigg, the exhibition’s curator, on how she perceives history will judge him.

“Scorsese has made a number of films that are well accepted as masterpieces, including Taxi Driver, Raging Bull and Goodfellas. Even if he had made just those 3 films, he would still have a towering reputation ….  Over the last fifty years he has made many wonderful documentaries  … He remains an iconic director whose films always have this incredible, complex, surging, vital energy to them and he has the ability to sweep an audience away, in a way that very few other filmmakers are able to.

“Even in his mid-seventies, Scorsese shows no signs of slowing down, currently directing his new film, Silence as well as a HBO series called Vinyl.

“He’s obsessed with his work and his films. Martin is a workaholic and he loves cinema and what else is he going to do with his time? He would rather be making films than do anything else.”

Melbourne based actor and director Josh Diaz was at the exhibition and I asked him for his take on the great man.

“Scorsese really opened up my acting in a sense of honesty and being fearless, and it’s there in all of his films, so Martin had a huge influence on me, especially when I was started out. Scorsese is one of those guys who will always be the same as a storyteller and never shy’s away from his decisions as a filmmaker and storyteller.”

With more than a hundred items on show at the exhibition, many from Scorsese’s personal archive, such as never before seen film outtakes and extracts, photos, handwritten notes, scripts, props, costumes, posters are on display, offering a close up view of his working process and creative instincts as a screenwriter, director and producer, this exhibition is well worth visiting.

The Martin Scorsese Exhibition is on display at the Australian Centre for the Moving Image at Federation Square, Melbourne until Sunday 18th September.