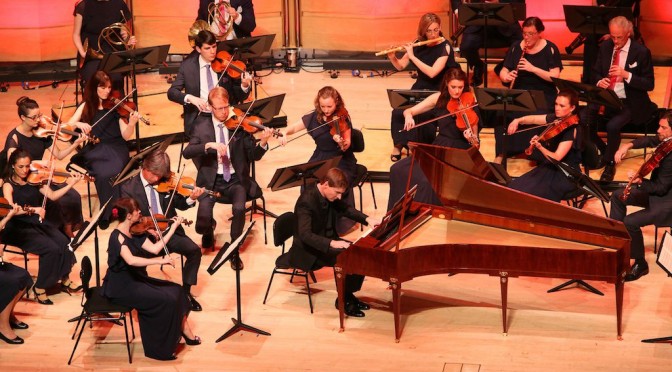 Sydney has been treated to a delicate and quite subtle musical feast in the latest concert programme by the Australian Brandenburg Orchestra. Guest director Kristian Bezuidenhout, part of the Brandenburg family and now an international guest artist with the world’s leading musical ensembles, led from the keyboard and gave a very refined performance. Like one of the famous solo Romantic pianists his whole being appeared totally absorbed in the performance, subsumed in the music.

Bezuidenhout is tall and gangly with large hands and very long fingers and he conducted very energetically, bouncing and almost dancing at times. The audience was hushed, rapt and attentive– as the cliche goes, you could have heard a pin drop.

The Australian Brandenburg Orchestra on their period instruments were in glowing, enthusiastic form and played with a superlative, intimate tone.

First up was J. C Bach’s Sinfonia in G major Op. 3, No. 6. The first movement had scurrying strings and was circular in atmosphere, vigorous and flowing. The second more stately movement was more melancholic and slower featuring a soaring, lush, eloquent melody. A dialogue between the two string sections bought this movement to a close. The third, much faster and darting movement was jaunty and concluded with a flourish.
A highlight of the programme was Bach’s sublime Sinfonia in D minor for two flutes. This was an exquisite piece.

The period flutes were played by Melissa Farrow and Mikaela Oberg in a soaring and floating, lush and delicate performance which was underpinned by the strings, and then a quite dramatic conversation between the sections of the Orchestra began, to be then joined by the flutes.

Following on from this piece was the much anticipated Mozart Piano concerto in D minor No. 20, K. 466 with Bezuidenhout as soloist on his special fortepiano . The first movement had a strong, emphatic opening from the Orchestra and Bezuidenhout’s impassioned playing was sparkling, rippling and luminous.

The second movement was a teasing dialogue between piano and orchestra, the piano cascading and shimmering. The third movement began very fast and agitated, developing into scurries and flurries from the Orchestra and Bezuidenhout on the piano attempting to keep the peace. The movement becomes a dynamic discussion between the orchestra and an emphatic soloist.

Bezuidenhout‘s playing displayed a fanatical attention to detail and showed beautifully crafted phrasing, and a light touch combined with masterful subtlety and shading. Rubato was used to indicate an important transition or a climactic chord.

The short Mozart piece Andante for Flute, K 315 after interval featured soloist Melissa Farrow in a beautiful pearl grey long gown that had a cowl neckline with a bejeweled stomacher and a rosette on her shoulder. With her authentic period flute  which has a mellow tone, the crystal like notes were ravishing and exquisite, and the soaring melodies enchanting .

The bulk of the second half consisted of the Mozart Symphony No. 36 in C major ‘Linz’ K 425. Bezuidenhout gave a charismatic performance.

The first movement had an emphatic opening and was quite bouncy, rather tumultuous and there were scurries and flurries from the Orchestra. Were we meant to pick up snippets of a quote from the Hallelujah Chorus from Haydn’s Messiah?!

In the other movements delicate slow and stately measures were contrasted with dancelike strains. A melody was taken and passed around the various sections of the orchestra. There were brisk and emphatic sections featuring shimmering strings and it ends in  a dramatic, tempestuous finale.

The Australian Brandenburg Orchestra with Kristian Bezuidenhout in Mozart’s Fortepiano concert is playing selected dates between the 9th and the 19th September at the City Recital Hall Angel Place as well as concerts taking place in Melbourne.