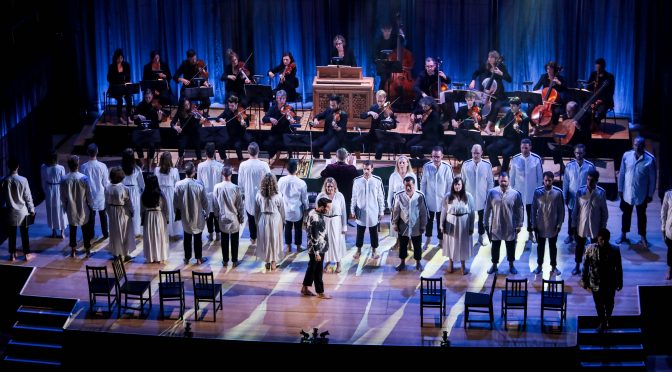 In the lead up to Lent and Easter we are very privileged to have the Brandenburg’s glorious performances of Handel’s THE MESSIAH, enthusiastically led and directed by Paul Dyer with the magnificent Brandenburg Choir, four soloists and a striking, very unusual and effective staging by Constantine Cosi.

Handel’s Oratorio on the life of Christ is divided into four ‘scenes’ : Darkness to Light , The Dream , Shame and Mourning, and Ecstatic Light.

THE MESSIAH follows the story of Christ from birth to crucifixion and resurrection, but it also examines Israelite history, exploring the prophets who preceded the Messiah (especially Isaiah) and looks forward to the birth of the Church. There is no single dominant narrative voice and little use is made of quoted speech.

The Orchestra, seated on a slightly raised platform, was in luminous form, and played with a warm, elegant tone on their period instruments – extra horns and drums were incorporated where necessary.

Dark blue curtains were drawn, and atmospheric, dramatic lighting was used throughout.

Whilst the work was written by Handel back in 1741, the piece is as resonant as ever.

The barefoot Brandenburg Choir – white dresses for the women , black trousers , white shirts with a black stripe for the men- were in exhilarating form too.

The ABO’s chorus was in scintillating form. The famous Hallelujah chorus was exuberantly, joyously performed, with the choir in red and white. At times, the Choir was explosively powerful, sometimes rumbling and roaring, at other times joyously bubbling.- the singing rippled, sparkled and jumped in some sections.

The staging was deceptively simple and very effective with some chairs used in the first half, and then the Choir was mostly standing in the second half, at times, moving with large blocks of precise movement .

At times, in the second half, it was as if the Chorus was an accusing crowd shouting ‘crucify him’, The very tricky and complicated final extended ‘Amen’ was handled delightfully.

All four soloists deserve praise, Soprano Lucia Martin-Carton was excellent . For her opening solos in The Dream, (in the first half), exquisitely singing of the angels, she was up on the middle balcony in a long simple elegantly cut beige dress. After interval, wearing a glamorous long red dress, her rendition of  I know that my Redeemer liveth was assured, soaring and confident .

Handsome tenor Kyle Bielfield, who wore a plain white jacket in the role of Christ, was terrific with a quiet yet charismatic presence, and a thrilling voice. He was powerful and passionate in his solos with spectacular control and phrasing.

Another way this performance of Handel’s much loved oratorio was out of the ordinary was in its  use of a counter tenor rather than an alto /mezzo soprano.

Nicholas Spanos was splendid. For He was despised  Spanos has a dramatic entrance, holding a long red scarf in his hands, that was eventually used to blindfold Bielfield. Spanos’ voice had  a compelling, warm tone.

Australian bass/baritone  David Greco’s Why Do The Nations, sung from standing within the audience on the middle balcony,  was performed  with great intensity and with the orchestra flooded with red light.

There was prolonged enthusiastic screams , cheers and applause , with a partial standing ovation at the end . Magnificent.

Concert running time – 2 hours and 15 minutes including one interval.

The Australian Brandenburg Orchestra and Choir’s concert HANDEL’S MESSIAH is playing at the City Recital Hall on various dates between the 22nd February and the 4th March.