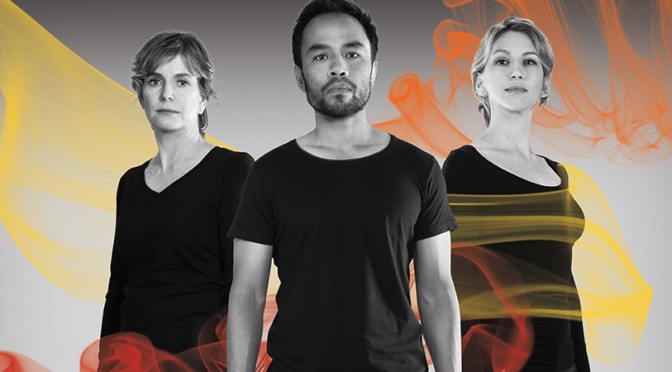 Under the dynamic, bouncy direction of Paul Dyer the Australian Brandenburg Orchestra was in magnificent form and sizzled in this electrifying concert.

The Orchestra played with a warm , elegant tone on their period instruments and there was great rapport between Dyer, featured violin soloist Shaun Lee-Chen and the Orchestra. (Lee-Chen is currently concert master for the Orchestra.) Considered avant-garde in their time, Fasch , Sammartini, Telemann, and Vivaldi created some glorious instrumental music. This is a fabulous chance to hear unusual combinations of instruments in magnificent Baroque concertos played with great flair.

The concert opened briskly (presto) with the Sammartini Overture to the opera Memet J-C88.The adante was slower, more delicate and reflective, with haunting layers of strings and a pulsating undertone. The concluding presto ma nontanto heard a return to the energetic speediness.

A major part of the first half was the Vivaldi Concerto for violin in D Major ‘Grosso Mogul’ RV208 which began with strident strings. Rather oddly, dark , heavily bearded soloist Lee-Chen walked in after the first section of the Allegro to begin playing and shot fireworks into the audience with his blisteringly fast playing of the fiendishly difficult solos.The Orchestra breathed and pulsated as one and Lee- Chen interrupted the polite musical conversation and took over dominating the conversation in between musical flurries and skirmishes. The Recitativo: Grave began as a conversation between Dyer on keyboard and Lee-Chen, the violin singing languorously in a soulful delicate and passionate duet, that develops into a full discussion with the orchestra. The third movement another Allegro featured another extremely difficult and blisteringly fast solo for Lee Chen, the violin almost birdlike with its astonishing swoops and swirls.(The audience went crazy at the end ).

To take us through to interval we heard the enchanting, regal Telemann Grand Concerto in d Major TWVdeest , a suite in six short movements, which had a strong martial opening and a firm tone. Much was made of the Baroque horns in this work ( played by Doree Dixon and Darryl Poulssen ) which were sprightly .Lyrical slow sections were contrasted with bright faster sections .It was somewhat circular with repeats at times all hurrying towards the vigorous finale.

The second half began with a most exciting Vivaldi Concerto for Several Instruments in F Major RV 569 in three movements.This time the horn players were centre front as were the recorder players . It opened with a galloping Allegro, Lee-Chen on the violin was luminous and dazzling effortlessly leading the extraordinary playing .The second Grave movement was far slower, with the violin sobbing a passionate lament. In the second Allegro movement the horns were fast and brisk, the violin having a dragonfly like darting solo and leading the orchestral conversation.

Then we heard the exquisite Telemann Concerto for flute and recorder in E Minor TWV 52:e1. The opening largo was delicately ,lushly ,lyrical with the strings passionately pulsating . The birdlike recorder and flute (Mikaela Oberg and Melissa Farrow) were soaring and darting .With Dyer on keyboard there was an enchanting trio that developed to a refined ,crystal clear duet with pizzicato accompaniment. The final Presto movement heard swirling strings and the flute and recorder bubble and cascade.

Last on the program was the Fasch Concerto in D major FWV L:D4a in three movements. The Allegro had a Handel like opening and Lee-Chen was lyrically soaring on the violin. The lyrical Adante was slower, the violin stating the melody which was then taken and developed by the orchestra and featuring another vibrant dazzling solo for Lee -Chen. The Allegro brought the concert to a dynamic conclusion and the audience was extremely enthusiastic.

The Australian Brandenburg Orchestra’s concert BLAZING BAROQUE is playing the City Recital Hall until August 6 and then tours to Brisbane and Melbourne.