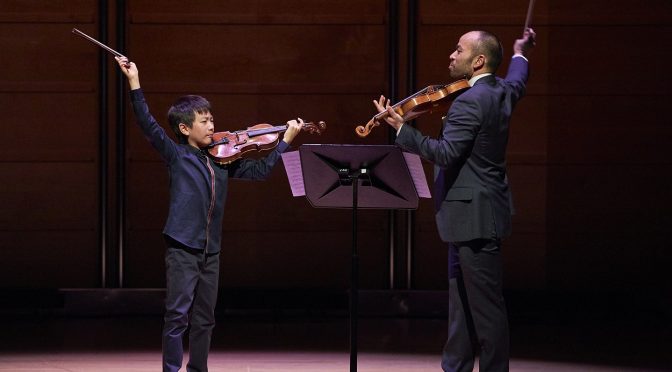 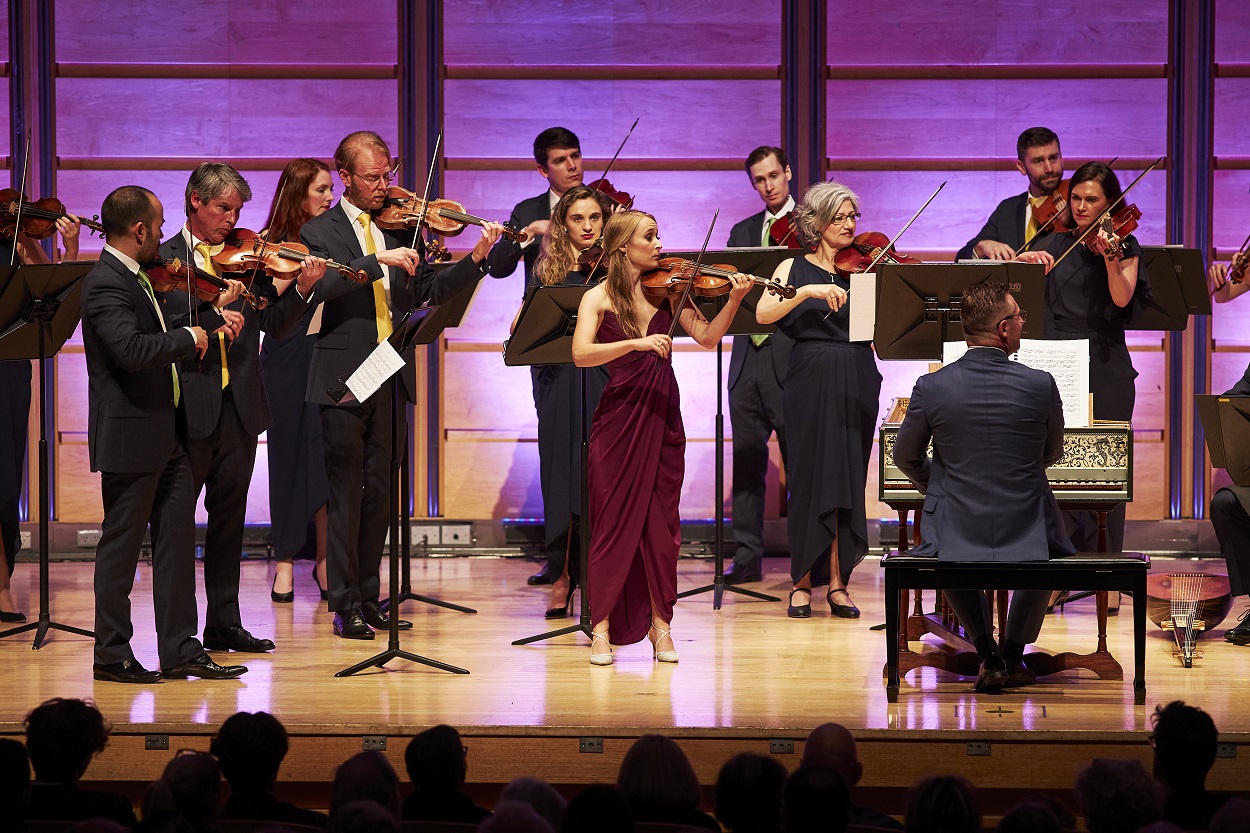 First up was eleven year old Christian Li from Melbourne in a dazzling performance of Halvorsen’s Passacaglia for violin and viola after Handel with Shaun Lee Chen in a shimmering, quivering, spiky performance that was fiery and darting , leaving the audience amazed.

Then came a refined yet passionate performance of Bach’s Ciaccona from Partita No. 2 in D minor featuring young violinist Annie Gard , full of assured elegance and crystal clarity.

Next was a vibrant yet stately rendition of Handel’s Overture from Julius Caesar , HWV17 by the ABO.

After that it was soprano Madison Nonoa ‘s turn in the spotlight with a reflective, ardent Tu dei ciel ministro eletto from Handel’s Il Trionfo del Tempo e della Verita HWV 46B with the Orchestra as limpid and pulsing accompaniment to her dark , rich timbre of voice.

To take us to interval Nonoa and the Orchestra then performed Da tempeste from Handel’s Julius Caesar,HMV17 .Nonoa was proud and defiant as Cleopatra ,shooting fireworks at Caesar with her bravura coloratura yet also at times delicate and subtle while the Orchestra provided exquisite support.

We returned after interval to enjoy a crisp , precise yet energetic performance of Handel’s Concerto Grosso Op.6 no 12 in B Minor HWV 330 . It began emphatically with shimmering circular violins. The second, fluid movement was slower and more stately , the third slow and pellucid.The final movements were brisk and spirited with darting , leaping strings.

Nonoa returned to delight us with O nox dulcis from Handel’s Saeviat tellus inter rigores HWV 24 in a ravishing ,soaring display of her jewel like sound and graceful legato.

Then we heard the bubbling , scampering fireworks of Let the Bright Seraphim from Handel’s Samson HWV 57 with both coloratura and horn flourishes.

Gard returned for the Vivaldi Violin Concerto Op. 9 No. 10 in G major with its brisk , flurried opening and a fiendishly difficult solo handled superbly by Gard .The second movement began far more softly and was played with great passion. The third movement was dynamic and scurrying.

Nonoa reappeared for a creamy , flowing rendition of Handel’s V’adoro pupille from his Julius Caesar HWV17.

The final piece was Tornami a vagheggiar from Handel’s Alcina again displaying Nonoa’s assurance and fine handling of her required coloratura fireworks.

The Australian Brandenburg Orchestra in their Next Generation Baroque is at the City Recital Hall various dates between 11-20 Sept in Sydney. 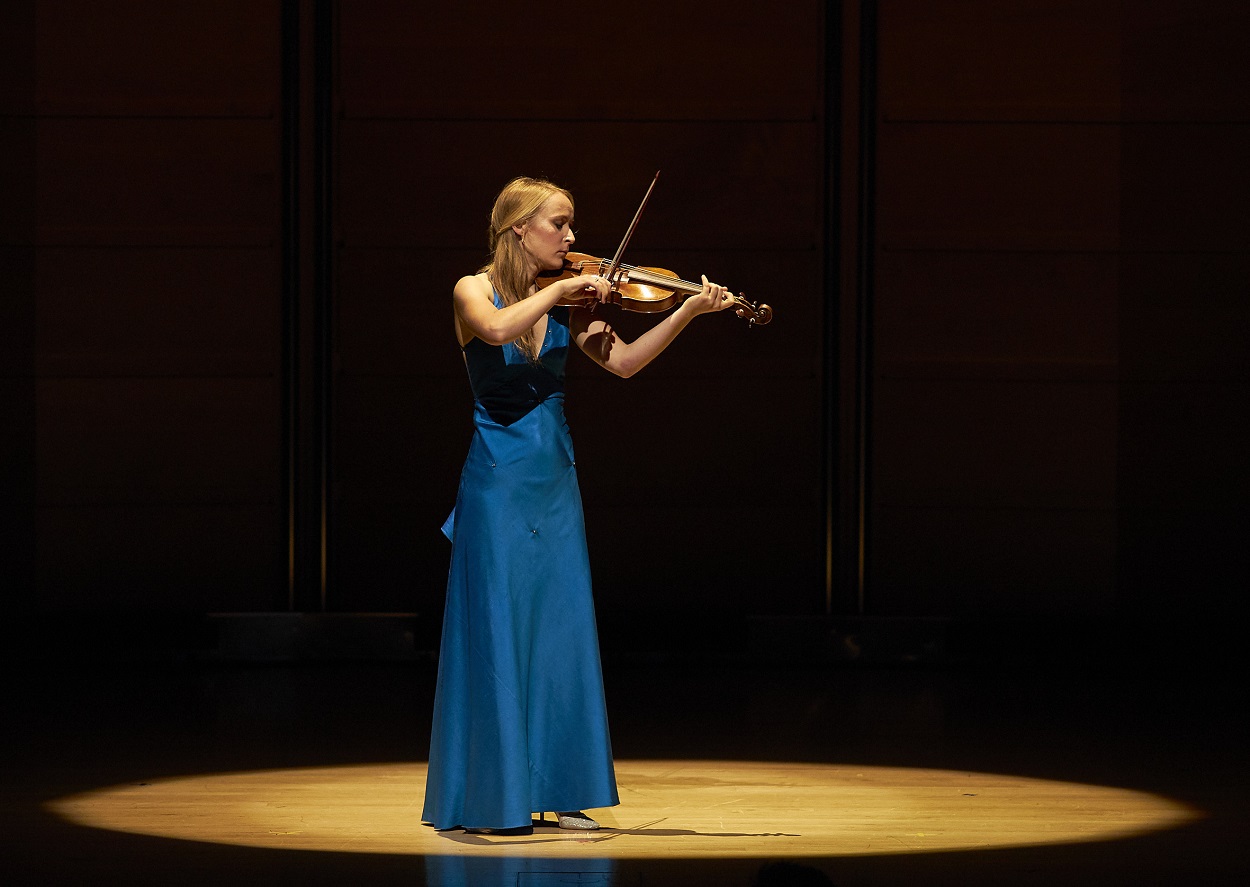