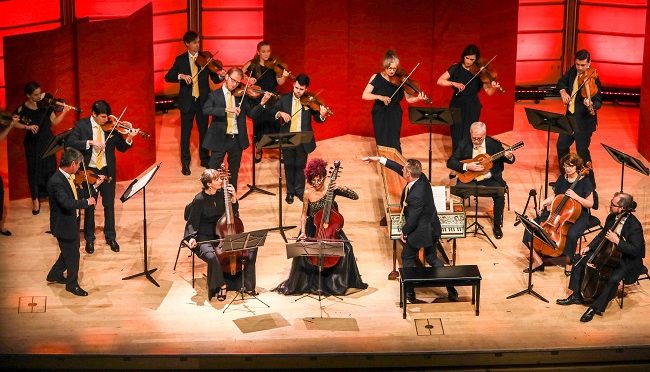 The second movement was more sombre, flowing and lyrical but this also included very fast sections with use of pizzicato for the rest of the strings while Lee Chen dazzled with his virtuosity.

There were emphatic rhythms and use of ritornello in the melodies throughout.

To take us to interval we then heard Vivaldi’s Concerto for 2 violins & viola da gamba, RV 578 .Lee -Chen was joined by Associate Concertmaster Matt Bruce and Fernandez. It had a rather spiky, ominous opening with scurries and flourishes on the violins. The second movement was more stately and refined with a forceful beat while the third movement was more vibrant, breathless and whirling with its circular melody. There was a dialogue between the two violins and Fernandez which was taken up and commented on by the Orchestra leading to the vigorous conclusion.

Returning for the second half of the concert we first heard Graun’s Concerto for Viola da Gamba in G Major featuring Fernandez. This is the Australian premiere of this work written in the early 18th century by a musician in the court of Frederick the Great. The first movement began brightly and briskly and was a sunny conversation between Fernandez and the Orchestra beautifully modulated and balanced. The second movement began with a melancholy lament then picked up in pulsating tempo. Fernandez’s solo for the cadenza was captivating and exquisite, heartfelt and flowing. The third movement had a vibrant opening and was mostly joyous and bubbling.

Next we heard Vivaldi’s‘s pensive Sinfonia al Santo Sepolcro, RV 169 in a powerful , rather sombre performance.

Dramatically spotlit improvisations by Bruce and violinist Ben Dollman segued to contemporary composer Renato Antonio Duchiffre’s Tempo di Tango movement from his Concerto for Two Violas da Gamba, for which Fernandez was joined by the Brandenburg’s Anthea Cottee. The tango was dynamic, an animated circular discussion with the Orchestra with a swirling, swooping finish.

The encore was a powerful haunting Cuban lullaby sung by Fernandez to the plucking of her upright viola de gamba set on a chair and gracefully accompanied by Cottee.

For more about Australian Brandenburg Orchestra : Lixsania and the Labyrinth, visit {Website:10}