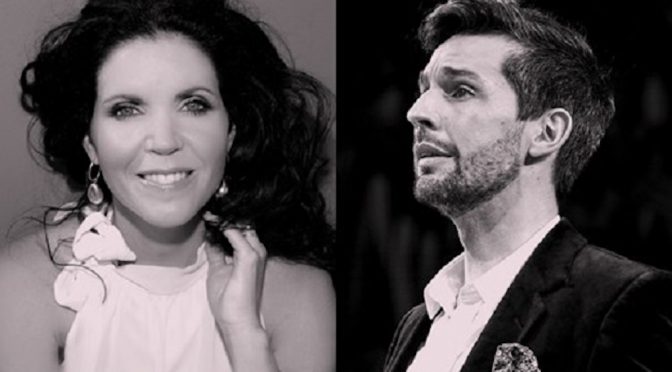 The Australian Brandenburg Orchestra was in fine form under the enthusiastic, energetic leadership of Paul Dyer.

The concert was filmed recently at Sydney’s City Recital Hall. A pair of angel’s wings provided an elegant backdrop.

The music was almost all a selection of Handel works, mostly snippets from various opera.

Along with the superb playing by the Orchestra we were treated to stellar performances by counter tenor Russel Harcourt and soprano Sara Macliver.

The concert began fast and furiously with scurrying strings for the Allegro from Handel’s ‘Concerto Grosso’.

Harcourt gave a striking rendition of Handel’s ‘Agitato de Fiere Tempeste’ from Oreste in which he unleashed vocal fireworks.

For this reviewer one of the highlights was Harcourt in Handel’s ‘O Patria from Arianna in Creta HMV 32’ which was rich, impassioned and flowing, and performed with impressive range and flexibility.

The Orchestra led by Dyer on harpsichord was in fine form in the highly structured, circular, repeated melodies of the Chaconne from Handel’s ‘Terpsichore’ with its strong ,emphatic beat. Of interest was the emphasised use of Baroque oboes and bassoons.

Macliver shone in her first piece, ‘Felicissima quest alma’ from Handel’s ‘Apollo e Dafne’.  Her performance was mellifluous and flowing, delicate yet with an emphatic rhythm and the strings used with pizzicato at times.

Another concert highlight was her performance of Graun’s solo ‘Tra Le Procelle Assorto’ from Cesare’s ‘Cleopatra ‘– she was a furious, proud and imperious queen who let rip with leaping, bounding, fiery turbulent vocals. There was thunderous applause at the end.

Back to Handel for Macliver, this time the leaping, flowing, tumbling, swooping ‘Scoglio d’immota fonte’ from his ‘Scipione’ with turbulent, scintillating flourishes, swearing undying fidelity to her first love as Berenice.

Then the Orchestra was featured in a magnificent performance of Handel’s ‘Concerto Grossi in B flat major’. There was a fast and furious performance of the ‘Vivace’,  while the Largo was eloquent and far slower, oozing and meandering, with the Baroque oboe featured.

In contrast, the allegro was light, delicate and bouncy. The Minuet, with its circular repeated rhythm for a dance, was sprightly and nimble, while the Gavotte had an emphatic beat and was more robust in atmosphere.

Harcourt shone with his limpid, honeyed tones in Handel’s lyrical, sinuous, pensive ‘Yet I can hear that dulcet lay from The Choice of Hercules’. This was followed by ‘Veni Turbini’ from Handel’s ‘Rinaldo’ where Harcourt and the Orchestra scurried boisterously.

The Largo from Handel’s ‘Overture in D Major’ followed with its puffing beat that led to leaping, darting music.