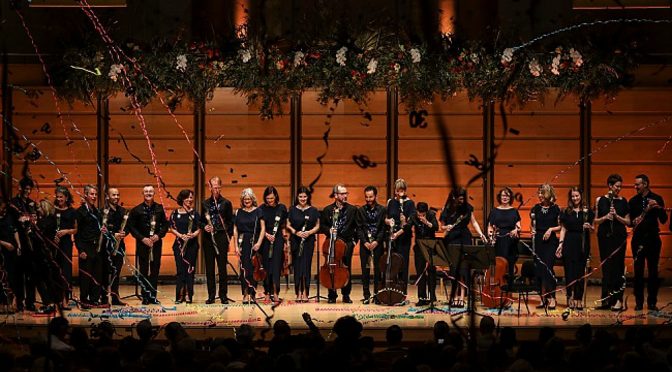 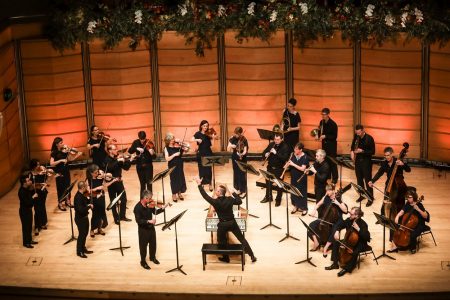 Happy Birthday to the Australian Brandenburg Orchestra! This year marks their 30th birthday and the season began with a glittering , joyous concert. There were many VIPS in the audience and the Orchestra’s playing under the enthusiastic and very energetic baton of Paul Dyer was in superb form . There were huge garlands of flowers across the middle balcony above the Orchestra .

Introductory speeches were made by Bruce Appelbaum the Managing director and then Dame Quentin Bryce .

We heard five of Bach’s Brandendburg Concertos. Written in 1721 the concertos were submitted to a possible patron the Margrave of Brandenburg and are a magnificent showcase to feature the musicians of the Orchestra on their period instruments and continual refinement of Historically Informed Performance style .

First was No. 4 in G major, BWV 1049 in three movements which featured recorders as played by Melissa Farrow and Mikaela Oberg. The first movement was bright and sprightly , the music leaping cascading and pulsating. Shaun Lee Chen had a fiery, insistent solo on his violin .The fluid music became a breathless dialogue for the ensemble.

The second movement was slower with a looping repeated melody and in the third the violins were energetic and emphatic with a featured very fast bubbly trio for Lee- Chen ,Farrow and Oberg on recorder , with another showy solo for Chen . Again a great dialogue ensued between all the ensemble leading to an emphatic conclusion.

Next we heard No. 6 in B-flat major, BWV 1051, written for lower strings, with soloists Monique O’Dea and Deirdre Dowling on violas and cellist Jamie Hey emerging as a soloist. The first movement had a rich, emphatic opening and a circular, pulsating repeated melody. The second movement was slower, far more delicate and melancholic. The third movement was in great contrast; dynamic leaping, darting and jumping.

To take us to interval came No. 5 in D major, BWV 1050. The first movement began with flourishes on the violins, then Farrow on the transverse flute entered and dominated singing a magnificent ‘aria’, so to speak. The supporting ensemble playing was superb,  Dollman leading on the violin, the flute cascading and soaring birdlike. Dyer had a sensational, rippling virtuoso solo on the harpsichord that had the audience screaming for more and stopping the show.

The second movement was exquisite also, lyrical and reflective, with a stunning trio for violin ,flute and harpsichord. In the bright, joyous third movement Farrow on flute was blisteringly fast and darting. There was another mini showy solo for Dyer and assorted virtuoso flourishes brought the concerto and first half of the concert to an end.

After interval we heard No. 1 in F major, BWV 1046 the only one in four movements and it requires quite a large ensemble. Off to a brisk, bright start the first movement was a bouncy, friendly discussion between the various sections of the Orchestra. The second movement was slower in tempo but had a dramatic woodwind opening (Christopher Palameta and Kirsten Barry on oboes, Brock Imison on bassoon), with the strings eventually joining in and commenting.

The fast, dynamic third movement featured Matt Bruce on violin leading an energetic ensemble discussion. The final fourth movement featured the woodwind then the violins shone in a lyrical segment and were the joined by the rest of the strings. The pulsating, circular melody was repeated – then the woodwind and horns interrupted briskly with a galloping tempo. The strings reply in far statelier, restrained fashion which then led to the rousing conclusion .

The last concerto for this concert was No. 3 in G major, BWV 1048., with its flurried opening and mini solos for Lee- Chen , Bruce and Dollman in a brisk, vibrant performance of the first movement . The second movement featured a delicate, fragile yet showy solo for Dyer on harpsichord that rippled and sparkled scattering shimmering star dust. In great contrast was the brisk, dynamic third and final movement with its tumbling, scurrying strings .
Afterwards there was tumultuous applause and screams of ‘ Bravo! “ – and silver confetti rained on the audience who threw streamers and cheered .

BACH BRANDENBURG CONCERTOS, the opening concert of the Australian Brandenburg Orchestra’s 2019 season,  is playing  the City Recital Hall 27 February – 8 March 2019 and then tours to Parramatta and Melbourne.