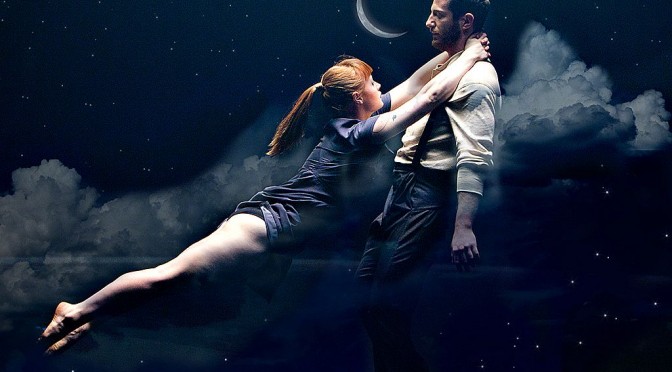 This must be one of, if not the, major landmark concerts of the year. The extraordinary talents of both the Australian Brandenburg Orchestra and Circa are combined in an incredible feast of a concert.

This is a celebration of luminous, thrilling French Baroque music.The first half, for the Brandenburg Orchestra alone , is an aural feast in itself. We start with a bang with the huge Orchestra in Rameau’s Overture to Nais  which was played very fast but in a controlled manner by the Orchestra dressed in their formal, elegant, dark attire.

Laissez durer la nuit by Le Camus introduced and featured the splendid guest artist Claire Lefilliâtre, sleek and stunning with dark hair and eyes in a strapless bronze coloured evening gown, accompanied by her harpsichord and theorbo. She has a glorious rich vibrant warm tone of voice and was dramatic ,passionate and soaring in her lament of a lover seeking the darkness.

Then came the multilayered suite from Rameau’s Les Indes Galantes .Dyer was positively beaming as he emphatically conducted swaying from the keyboard. The first section was rather elegant and stately, the second part a rather more formal dance (note the use of the Baroque recorders), the third segment was  a circular dance for strings which were eventually joined by the woodwinds.

This was followed by an explosive flurrying scurrying section with strings and drums. A dialogue between the two halves of the string section then followed. Dyer was dancing in the following fast round dance that included tambourine. This was followed by an exquisite, flowing lament from the string section and the finale was a stirring, boisterous, martial piece with flutes, drums and trumpets to breathlessly take us to interval.

In the second half, a ‘’pasticcio” of assorted French Baroque music, the Australian Brandenburg Orchestra was joined by the wonderful Circa company from Brisbane in a dazzling display. Translations of the songs were provided in the program.

The interaction between the Orchestra and Circa members was tightly choreographed and performed with wicked enjoyment.

Dyer conjured the Orchestra like a magician. In this half the Orchestra wore black and white outfits, Dyer wearing a floral detailed jacket matching the Circa members. The men of Circa all wore floral designs costumes, the women stunning long glamorous evening gowns in solid colours (red, blue, yellow, purple) with matching leotards underneath.

The second half opened dramatically with standing backward somersaults. This was followed by an astonishing, joyous display of circus work– balancing, tumbling, juggling combined with swirling movements, formal dancing and plenty of floorwork.

Musically the orchestra  mostly shifted to the back of the stage, with a black tarquet floor and several white plastic chairs prepared for Circa and the singers. At one point there was a thrilling parade/entrance by Orchestra members.

The Circa members performed fluid, rolling floorwork in their swishing , swirling long gowns. Did I detect a possible Pina Bausch/Meryl Tankard influence, and also Murphy’s Tivoli ?!

The ‘Murphy walk’ was also used. Paul O’Keeffe had an amazing chair balancing act, Billie Wilson-Coffey had a mesmerizing silky ,swirling aerialist segment just to mention two of the many highlights .

At a couple of points the huge entire Orchestra was crowded on stage as well as Circa, in simple lines. Lefilliâtre was also regally featured in this second half, ably supported by a handsome trio of male singers. This was as Dyer and Lifschitz in their opening night addresses before the concert reminded us , an exquisitely delightful ‘’entertainment’ that had the audience cheering and stamping ecstatically at the end.

It is now 25 years since Dyer established the Australian Brandenburg Orchestra and a new CD has just been released to celebrate this. It is well worth purchasing.

The Australian Brandenburg Orchestra and Circa presentation of French Baroque plays the City Recital Hall until Saturday 1st August. The concert then moves to Melbourne.