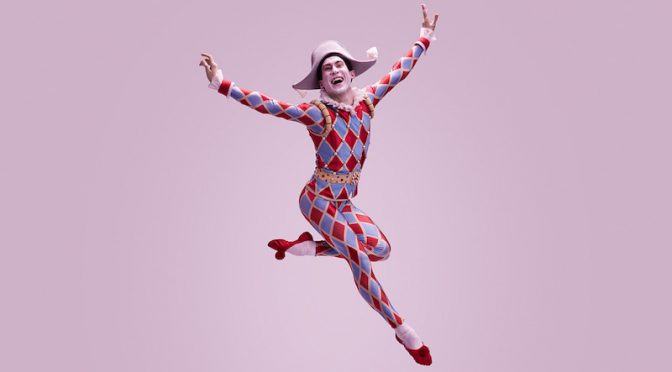 After what The Australian Ballet’s Executive Director Libby Christie called “a year of great disappointments and challenges”, there will be a full program of works in 2021, a year TAB has dubbed A New Era.

The most important new element is, of course, David Hallberg as Artistic Director. He succeeds David McAllister formally on 1 January but today launched his first season which, in keeping with the times, was a digital presentation. In a graceful handover, McAllister said Hallberg would “chart a dazzling future” for ballet.

“What an honour it is. I’m immensely thrilled and inspired to be stepping into the role of Artistic Director,” Hallberg said. “We have weathered the storm and it is in with renewed spirit that we return to the stage.” Referring to TAB’s long-standing mantra, he said the company would continue to dare to be different while respecting tradition.

The programming is not entirely all Hallberg’s. “I was actually happy to inherit and partially curate,” Hallberg said.. “It’s been a happy medium of a transition in a way.”

The full-length narrative ballets Anna Karenina and Harlequinade have been rescued from McAllister’s mostly cancelled 2020 season while Hallberg’s stamp is clearly seen in two contemporary mixed bills. He has shot out of the gate by securing the internationally admired American contemporary choreographer Pam Tanowitz for a new work and brings William Forsythe’s Artifact Suite to Australia for the first time.

The year opens in February with four performances of a gala program, Summertime at the Ballet, which will be staged at the huge Margaret Court Arena – a new venue for the company. Only Melbourne gets this treat, which will feature a clutch of audience favourites including excerpts from La Bayadère, Don Quixote and The Merry Widow. Stephen Baynes, Tim Harbour and Lucas Jervies will be the standard bearers for work by home-grown choreographers.

Sydney (April) and Melbourne (June) will see New York Dialects, in which the Tanowitz commission will premiere, accompanied by two Balanchine works already familiar to Australian audiences, Serenade and The Four Temperaments. Hallberg knew Tanowitz long before she was able to make a full-time career from choreography. Now she makes work for the likes of New York City Ballet, The Royal Ballet and American Ballet Theatre. There will be a pleasing symmetry between Tanowitz and Balanchine: Hallberg said Tanowitz’s piece would be made on the men of TAB, using exactly the number of women as in Serenade. It will be danced to a score by Caroline Shaw. In 2013 Shaw was the youngest recipient of a Pulitzer Prize for Music.

Counterpointe (April – May) is a Sydney-only progam that sets the classicism of Petita’s Raymonda Act III(1898) against Artifact Suite. Forsythe choreographed a full-length Artifact in 1984 for Frankfurt Ballet, calling it “a ballet about ballet”. He condensed the piece into one act – Artifact Suite – for Scottish Ballet in 2004. Hallberg intends this program to show the evolution of classical form by juxtaposing the opulent formality of Raymonda with Forsythe’s classically based, vigorously 20th-century language (accompanied by crashing-up-and-down curtains and deconstruction of Bach). “It shows where ballet was and how valid it still is, and where it can continue to go if given the right choreographic voice,” Hallberg said.

Seasoned TAB audience members will remember the André Prokovsky version of Tolstoy’s Anna Karenina premiered by the company in 1979 with music by Tchaikovsky (Marilyn Rowe was the opening-night Anna). This production fell out of favour in the 1990s but the story never grows old. This new version by Yuri Possokhov, with a commissioned score by Ilya Demutsky, is a co-production between TAB and The Joffrey Ballet, which premiered it in 2019. It opens in Melbourne in June then goes to Adelaide in July.

There’s more ill-fated romance to follow with a revival of the John Cranko Romeo and Juliet (Melbourne, August – September; Sydney November). “Audiences love it, dancers know it and have memories of it. It would be brash of me to forget or disrespect the DNA of the company and bring in the [Kenneth MacMillan] version I know,” Hallberg said. “That would be a bit ignorant of me. Cranko’s version is just as well-known and famous as MacMillan’s and it’s part of the history of the company which I have every intention of upholding.”The year ends on a jaunty note with another co-production, this time between Hallberg’s former home ABT and TAB (arranged before Hallberg took on his new role). The commedia dell’arte romp Harlequinade (Melbourne, September; Sydney, November – December) was made by Petipa in 1900 and has been revived and refreshed by Alexei Ratmansky in 2018, working from the original notation.

Another aspect of newness will be seen in greater use of digital possibilities. As did so many companies, TAB used digital means in 2020 to keep a connection with audiences. The choreographic development season Bodytorque was presented this way and that will continue along with other digital content and events. Christie said a Federal Government RISE grant (Restart Investment to Sustain and Expand) would enable TAB to, among other things, develop the capacity to livestream performances during 2021. More details will be released later.