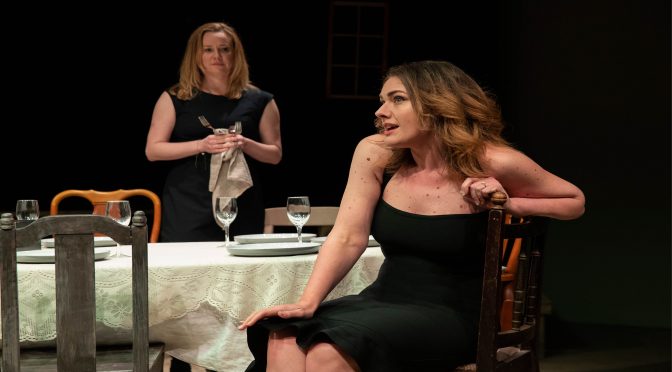 Beverly Weston is speaking to a figure in the dark as the play begins.  It will turn out that this, once promising,poet is interviewing Johnna for a position as cook and cleaner in his house just outside Pawhuska, Oklahoma.  It will also turn out that he has an addiction to alcohol and his wife, Violet, has an addition to pills.  And cigarettes, despite her mouth being filthy with cancer and little cruelties.  As the story weaves into itself after this prologue and after a tragedy, we will meet their three daughters, Ivy, Barbara and Karen and truths will be told in the heat of a southern summer.

James Bean plays Beverly and that first scene is designed to reach out of the dark and begin a mystery of sorts.  Bean’s voice work is just stellar with wry cynicism and just enough pause before a comic line or moment of import to telegraph it for us.  As Johnna, the mostly silent observer of Beverly and his family, Emilia Stubbs-Grigoriou avoids the stoic Indian tropes to give us a Cheyenne woman who is comfortable with her lot and with the grace and stillness to observe without judgement.  The other character we meet in the prologue is Alice Livingstone’s Violet.

This is a woman who knows how to make an entrance.  Sweary and unsteady and absolutely, arrogantly fragile.  Livingstone brings Violet alive with a Cracknellesque manipulative odiousness that is delicious to watch.   And her physicality is brilliant character building.  From the vicious stoned curtsey of her first scene to her use of eyeline in the monologue, this is a wonderful performance in a production overflowing with them.

AUGUST: OSAGE COUNTY is drama of despairing hopelessness and yet, somehow, a comedy of observation.  There are sections where tension is brittle and breaks into shards skewering all the characters and their audience but there are also lines where a laugh escapes you for all the wrong reasons.  The latter is often the fault of Livingstone’s Violet.

Or Emily Weare’s Mattie Fae, Violet’s sister.  Weare, too, manages to explode onto stage with a combative disregard for people’s feelings including those of her husband, Charlie (Peter Flett in a terrific role) or Ivy (Sonya Kerr).  With all the invisibility of the familiar, close to home, middle child Kerr’s Ivy is a well expressed drudge used to her mother’s filterless little tortures.  The weight of caring has fallen on her and her absent sisters will swoop home in complete disregard of her contribution.  Kerr also gives her character a lightness and secret happiness in the early scenes that translates well into the climax of the play.

Helen Stuart is Barbara, oldest child, mother’s favourite though you wouldn’t notice it, and way too heavy handed on the wine bottle like her father and on the destructive sarcasm like Violet.  Stuart is pinpoint here, her watching as replete as her dialogue.  Her husband, Bill is played by Adrian Adam with a stolid sturdiness in a role which is vital, if not showy.  Where there is a flair for the dramatic is youngest sister Karen.  Amy Scott-Smith has firmly grasped the airy fairy in Karen and pulled her almost to ground, giving a believability to one of the less palatable aspects of the plot.

The men of AUGUST: OSAGE COUNTY are as complicated, for good or ill, as the women that the story weaves around.  One of the outstanding male performances is the always reliable Lynden Jones as Steve.  This is a tricky role, it needs an overtness that is dealt with a deft hand and Jones and Director Louise Fisher have placed it perfectly within the thorny narrative.  Just one of the stellar choices made by Fisher to create such a fine production.  With nuance and intelligent choices Fisher has created a cohesive production which gently rises and falls without being anti-climactic.   And Fisher walks a knife edge in some scenes … like the ‘boobs’ scene which is directed for maximum embarrassment without slipping into squirm territory.  Her use of the women’s voices gives depth to the femaleness of the text and her creation of entrance points and movement around the set is also smooth and unhurried.

Fisher is aided by an evocative set. (Costuming and Set: Sallyanne Facer).  Without attempting naturalism yet avoiding the abstract, the space definition works well to give a sense of levels and the neutral, distressed floor and platforms re-inforce the heat references in the text. Plus the opening of the upstage blacks to reveal a cyclorama as Weston house opens up is used to effect.  Though I would have had a black border over the LED assign numbers which do distract at times.

Otherwise, the lighting (Michael Schell) is an adjunct to the story in the way it focusses viewers’ attention without confining the characters.  Also neatly achieved is an unobtrusive time setting, for example, the yellow contrasts of the last few scenes nicely lift the shadows off the state.  The music (David Cashman) is fun in places, cleverly upbeat at interval and there is some very smooth mood setting of the mouth organ between the final scenes of the show. Costumes are just as understated as the rest of the production values with some very clever interrogation of text in the costume choices … Mattie Fae and Charlie in Act 3, for example, and it is rich with detail in belts and bracelets and watches etc.

It is such a pleasure to sit back and enjoy the events of AUGUST: OSAGE COUNTY.  Beautifully drawn characters people this stage, lots of them, and it’s not just their stories you will take with you from the theatre.    There is a bitchy riposte or a swallowed courage or a bad impulse acted on in all of us and this production allows the luxury of consequence exploration and engagement with our lesser selves.  The truths told may not be ours but a shared humanity is never wasted.