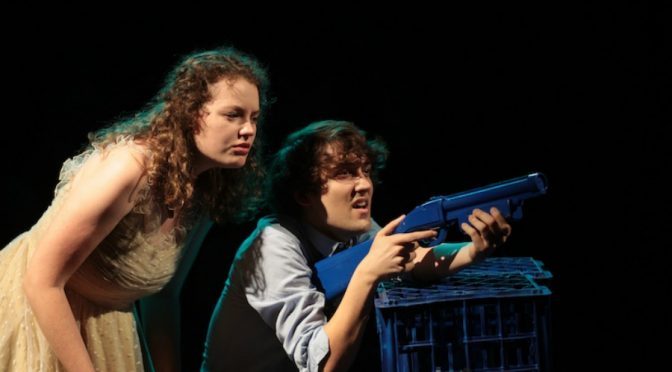 If INTERSECTION is any indication of the professionalism, focus and commitment of the next generation of performing artists then the art is in a pretty good state. From 15 -24 years, these nineteen actors have my complete admiration for their unwavering composure as they brought to life the 10 short plays in the 90 minute production. I attended a matinee … it was viciously hot; patrons were reluctantly and unavoidably noisily leaving because of the swelter; there was a somewhat drunken, very loud party going on outside and yet not one performer short- changed their audience.

Australian Theatre for Young People (ATYP) has a few generations of experience behind them and is well known for their facilitation and creation of new works. INTERSECTION is one such. ATYP supports a diverse range of Youth Theatre activities including the annual National Studio where they work with young and emerging writers for youth.

INTERSECTION is 10 works (two handers and monologues and one three hander) which are drawn from those writers. As such do not have a cohesion we might expect in a different kind of show but wisely, Director Katrina Douglas has not artificially concocted a narrative. There is a school prom vaguely in the background but the stories intersect where we encounter 17 year olds and their lives and loves.

Williams has the difficult task of being onstage alone as the audience enters but he manages to physicalize surly adolescence without overdoing it. When Musty enters the scene they swiftly create a very nice relationship between the characters and their dynamic sets the stage well for the tension that will arrive as they begin to outgrow their childish friendship. Both actors also did a great job of handling the weirdness that arises later in the play.

There was some lovely acting in this piece. Both actors had a bedrock to their characters which allowed their swallowed anger to be realistically explosive. In addition, each had obviously prepared a backstory which gave Claudia and Dom’s use of words like hate , bomb ,knives real impact. I also really enjoyed the way each actor successfully conveyed the embarrassment of attraction.

It is a real credit to these two actors that early on I assumed the characters were brothers. Their rapport, expressed as an instant mateship, was excellent but with an underlying tension which siblings might have. In the event, they are bonded by their geography and their decision whether to stay or leave the land and both actors neatly negotiated the mystery build of the text.

This was terrific work by both Stepfner and Pimblett. The sense of unease and inner loneliness in the characters was palpable and the interplay between them allowed for the gradual growth of trust from the early wariness. Congratulations also for the bringing out the sub textual richness of the dialogue without slipping into stereotype or easy interpretations.

This was a cracker performance by Randles. The negotiation through the singular second-person text to indicate why the character wants to be distanced from her life was excellent. Randles also travelled well emotionally particularly in the discomfiture and oversharing of the girl.

Embarrassment was also the predominant feature of this piece and it was equally well handled by Leighton and Lazar who also effectively mined the comic elements of the text. Leighton was particularly good as a slightly dominant Karolina; we got a very strong sense of her frustration at his awkward, clumsy inability to connect. She also had an excellent command of what a seduction might feel like to this character . Considering the small space they had for the piece they both moved very well around the invisible shooting gallery.

What really made this piece so effective was the actors’ emotional expression of old hurts. Because of the redemptive nature of the text, the two characters must meet as strangers yet with knowledge unsaid. Both actors achieved the difficult task of hinting at real feelings under the on-the-surface interactions early in the piece. This gave the confrontation both weight and depth.

Different goals will separate the three characters of this play and its evident that the friendship will splinter and some will be left behind if they are resistant to change. These are challenging concepts to put across but the three actors had a great camaraderie and each a clear character to serve the emotional context of the story. Their physicality was also excellent as they drew apart and the differences between them were reflected in a stolidness or lightness of movement.

This was fantastic little performance by two actors who used their differences to great effect. One huddled and insular and one open, chirpily inappropriate and curious. I loved how the stricken sister was pulled slowly from her despair by the relentless enthusiasms of her new friend. How restless exuberance doesn’t moderate in the face of social faux pas or an accrued understanding of despair was especially well expressed. It was really well done by these two young women.

I’m not really prepared to use words like courageous or truthful for May Tran’s performance because trite adjectives would diminish the professionalism of her work. This is solid, expressive, emotional work from an actor who has power in voice and attitude, an actor who interpreted a first-person monologue with relatability and vulnerability. Really nice acting.

INTERSECTION certainly puts some exciting performances on display. While I might have reservations about some of the works as written and whether a 90 minute production is the best way to showcase them, it is equally exciting that the wonderful Currency House has published the scripts and will continue working with ATYP to support youth theatre.

But I would encourage audiences to see INTERSECTION not just in support youth theatre but because of the marvellous cast and each one of their thoughtful, disciplined, engaging performances.