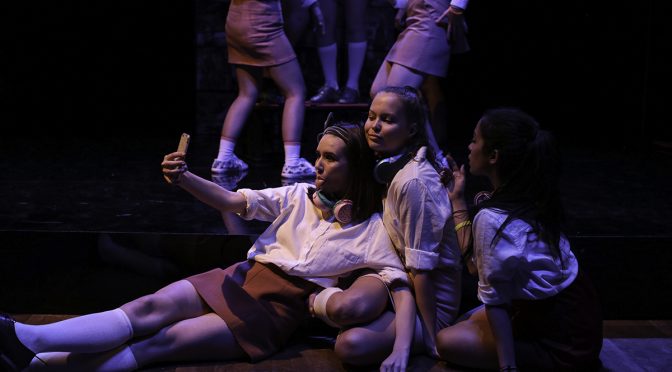 All images by Tracy Schramm.

This year, the Australian Theatre For Young aPeople (ATYP) has initiated an  exciting new program – the Homeroom Series.  The first in the series featured  a thought provoking A Double Bill depicting the challenges that young people face in an increasingly complex and at times overwhelming world.

The two plays performed were British playwright Evan Placey’s GIRLS LIKE THAT, an ensemble piece for young women, and Australian playwright Lachlan Philpott’s MICHAEL SWORDFISH  which was an encore season  for young men which was originally written for, and  performed by students from Newington College.

Both main characters are teenagers who are out of synch and different with their peers. This being the case their lives become increasingly difficult, to the point of being unbearable.  Both go missing, and the guts of both plays are concerned with the anxiety that  their disappearance causes, and the longing to bring them back to the herd and somehow make it up to them.

As dark and penetrating as both plays were, it was comsoling to see that both playwrights came up with endings that featured notions of reconciliation, a desire to  accept differences, and to be part of a team/a group, to belong.

Both productions, GIRLS LIKE THAT was directed by Rob Jago and MICHAEL SWORDFISH  was helmed by Tamara Smith, were exhilarating in terms of the electric  energy coming from the actors. The leads gave strong performances and the group/chorus/dance work was outstanding with effective use of edgy contemporary music and incisive set and lighting designs.