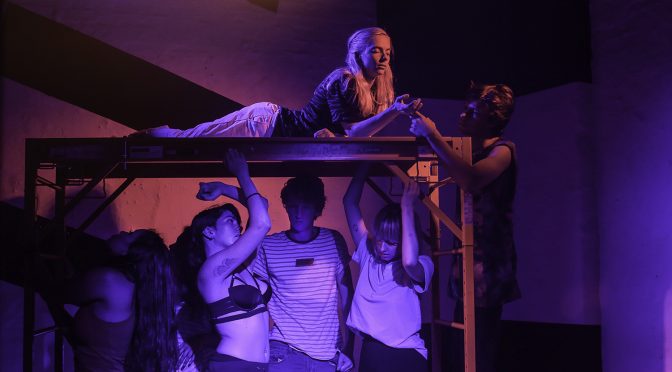 The Australian Theatre For Young People (ATYP), the national youth theatre company,  is committed to commissioning and developing plays that young people aged between 10 and 26 can perform.

Each year a selection of 20 writers aged between 18 and  26 attend the National Studio at Bundanon near Nowra for a week long playwriting retreat led by some of the nation’s leading playwrights and dramaturgs. By the end of the week they must have written seven minute scenes for their cohort actors. ATYP then selects ten of these short plays for production. The end of this creative journey is a collection of plays with the umbrella title being INTERSECTION : ARRIVAL.

The performance we attended today at the Griffin Theatre was sent out live to high schools throughout the country.

It would be unfair nay impossible to cherry-pick a favourite play but what was pleasurable was the youthful exuberance of the cast who brought the playwrights’ words to life. The ensemble of twelve actors masterfully directed by Sophie Kelly met some particular challenges that had to be overcome. Because some of the actors had school and university commitments, the rehearsal times had to be limited ie 3 weeks. Furthermore, for the first two weeks  of rehearsals the scenes had to be blocked using tables. Scaffolding sets arrived a week before the performance necessitating a restaging of the play.

The set and costume designs by Tyler Hawkins, in particular I want to mention the two sets of scaffolding which were ‘danced around’ the stage, broken down and rebuilt to conjure up scenes on trains, a cinema, a school locker room, and a highway encounter with a dog, and a disco nightclub.

After the performance ended there was a Q and A with the cast. When asked what they derived most from being involved in the production, the cast  spoke of the level of professionalism demanded and obtained by ATYP. Cast and crew were punctual, the ATYP looked after their needs and they were able to concentrate on getting their performances right. One of the aims of today’s special matinee simulcast was to inspire and encourage  talented young actors to audition for future productions at the Australian Theatre for Young People.