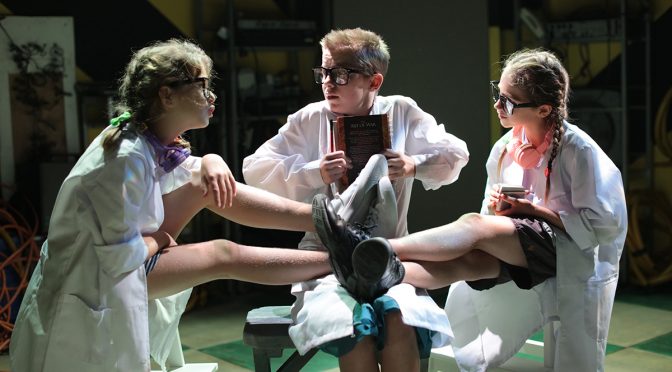 Sam O’Sullivan’s play is the 2017 ATYP Commission winner for a play to be performed by young actors between the ages of 10 and 13.  It is recommended viewing for ages 8 and above.  The play has been directed by Jena Prince.

The play’s premise is what if a primary school aged kid messed with spacetime while trying to fix a moment in  the past and got herself stuck in a time loop. And what if she gets all her friends to try and help her to get out of the time loop and  these friends turn out to be just different versions of herself?

The best guide to this play comes from Jena Prince in her program note – “Charlie Pilgrim is a play about being confronted with all the different parts that make you you, and how difficult that can be. None of us are one dimensional, or only have a single personality trait that defines who we are. This is obviously a good thing – it makes us interesting!- but I’m sure many of us wish we could change or get rid of certain parts of ourselves. Parts that we’re embarrassed about or ashamed by. CHARLIE PILGRIM puts all these parts into a single room and won’t let them out until we can embrace and love every single tiny little piece of ourselves…

“When you are standing face to face with the worst part of yourself, what will your choice be? To turn away and ignore them, hoping one day they’ll just disappear? Or to acknowledge and accept them, and reach out to take their hand with yours?

The striving to integrate the different parts of oneself has long been a goal in popular psychology.  The sixteen talented young actors worked within this theme well and brought the play vividly to life. The performances were uniformly good.

The stage was set up  like a mad scientists’ laboratory with different pieces of ‘scientific equipment scattered around the room.

Jena Prince’s production was high energy and well realised with plenty of high drama and twists and turns in the plot. For light and shade there were some humorous touches.

Recommended, CHARLIE PILGRIM (OR A BEGINNER’S GUIDE TO TIME TRAVEL) is playing the SBW Stables Theatre until 1 December 2018.