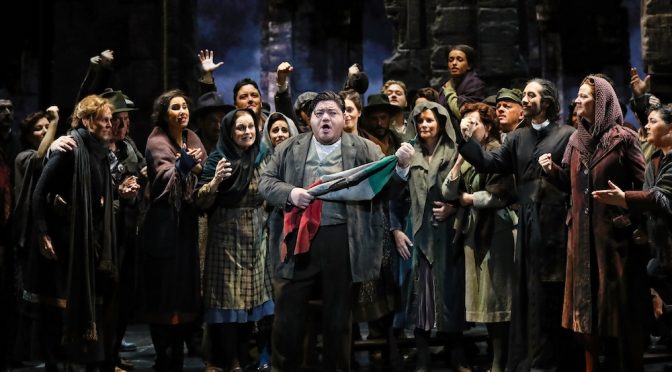 Some background into the story… The Huns are still a mystery to historians. They were nomadic people, most likely from somewhere between the eastern edge of the Altai Mountains and Caspian Sea, roughly where you’ll now find modern Kazakhstan. Many artistic impressions of them are as Asians, others show red headed fair skinned Aryan people similar to the oldest records of Genghis Khan. In the 5th Century they were described as barbaric and uncivilised yet, compared to the corrupt Roman Empire, they appear to be extremely loyal to their family members, well organised and lethal in accelerating the fall of the Roman Empire.

This was the second opera Verdi wrote for Venice. It was based on a play from about 30 years earlier by Zacharias Werner. There were some swaps and changes in Librettist during the creative process which took around 12-18 months and the opera was premiered in Spring 1846. Critics were fairly ho-hum but the audience loved it, particularly as the theme of saving Italy from invaders matched well with the struggle at the time for Italy’s independence from Austria.

The opera is set around the Huns attack on the ancient Roman city of Aquileia on the North East border of Italy. Pushing the setting from the 5th Century into the pre-World War II era, guns replace swords, black leather trench coats replace ancient dress and vinyl records replace lyres.

The Opera Australia orchestra was perfectly balanced under the skilled hands (no baton) of maestro Andrea Licata. His choices were tasteful, unhurried and sensitive to the action, absolutely superb. We are lucky to benefit from his direction at least one season a year.

Attila arrived on a real black steed, one who is very well behaved with ears pricked, enjoying the music – absolutely gorgeous. In the lead role was Ukraine bass Tarah Berezhansky offering a powerful opening to the scene with a clear rich voice. The heroine of the story is Italian Odabella played by local soprano Natalie Aroyan. As great as any international singer, Aroyan easily surpassed the full orchestra and chorus in volume, fierce in her interpretation and completely believable in her dramatic skills, willing to die for her country, enough to knock the socks of Attlia and stop him in his tracks. She was absolutely outstanding.

Her lover Foresto, played by Opera Australia regular Diego Torre, was far more subtle. Spending most of his time bemoaning the bleak outlook, it seemed less believable the character would then join the front line to attack the Huns. Not much chemistry seemed to be there between Torre and Aroyan with affection being rather awkward, however Torre’s voice was as magnificent as we’ve come to expect, particularly in Act Three “Che non avrebbe il misero” which received great applause and yells from the crowd.

In his debut for Opera Australia, Italian born baritone Simone Piazzola played the Roman General Ezio who has to negotiate with and, ultimately, attack Attila. The voice is still light and clear with room for more development in power and richness as well as room for more drama classes. Piazzola was very pleased with his performance though some of the expressions prompted laughter from the audience.

Roman sidekick Uldino was well played by Australian Italian Virgilio Marino with clear, articulate singing and strong acting skills. In the small though pivotal role of Pope Leo 1 was another company regular Gennadi Dubinsky complete with white horse. His is such an important scene where Attila is struck with fear at the Pope’s warning against marching on Rome. However, it didn’t strike the audience as being anything worth worrying about. Perhaps some extra direction may have helped bring out the drama of the moment. The artists appear to have done all that was asked of them.

As mentioned the sets are bleak being in the war zone throughout the 3 Acts. Only a little light was provided as relief in the sky behind the Pope’s scene and at Attila’s Banquet in Act 2 where the chorus and dancers appeared to be more 1930’s Berlin club style rather than anything from Italy.

The company brought out their large digital screens as backdrops, this time to great effect. A very different design from past productions with scenes to fill in the back story, smoke and scenery that complemented the action rather than competed with it.

Director Davide Livermore returns from the last year’s ‘Anna Bolena’ and Aida the year before. Reproducing a production from overseas does limit creative freedom so it is not clear which directorial choices he made. Regardless of whoever directed the action there seemed to be a clear, biased view against women. This ranged from fierce violence and executions in the opening scene through to Foresto and Ezio tying up Attila so Odabella could exact her revenge at the close. Her character felt strong enough to do-it-yourself based on what we already seen so making it easy for her in this way seemed patronising.

Overall, it’s an interesting new production with strong principals and a marvellous conductor making it definitely worth viewing.

For dates in Sydney and Melbourne visit the Opera Australia website: https://opera.org.au/

UPDATE: The rest of Sydney season along with Carmen and Great Opera Hits have been cancelled due to government restrictions on large gatherings until 28 March. You may still be able to see this production in Melbourne in May 2020. Hopefully this break in the schedule will be short.