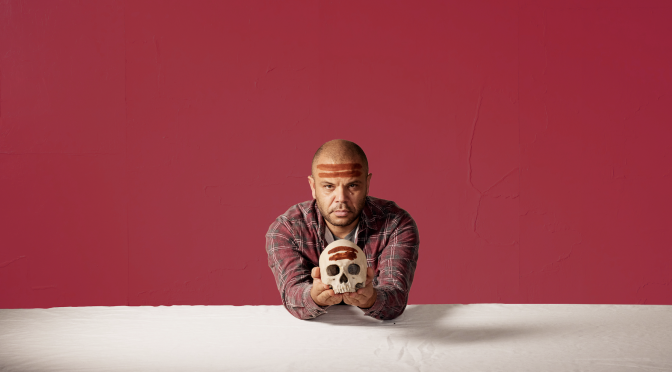 Young Palawanese playwright Nathan Maynard (The Season, Hide the Dog), a Trawlwoolway, Pakana/Palawa man, was awarded the Balnaves Aboriginal and Torres Strait Islander Fellowship in 2019, supporting the writing and development of At What Cost?.

In Maynard’s home state of Lutrawita (Tasmania), Boyd’s got enough on his plate between keeping a family together and his responsibilities to land and people. But something’s happening. Every year more and more folk are claiming to be Palawa too. Folk no-one’s heard of until now, who haven’t been ‘round before. Are they legit? Or are they ‘tick-a- box’? Who decides? And how? If Boyd’s going to take everyone forward, they’re all going to have to go back, old mob or new, into the island’s knotty past. And they might not like what they find there…

At What Cost? will play upstairs at Belvoir Street Theatre between the 29th January  and 20th February 2022.

Featured image : Luke Carroll in the upcoming production of ‘At What Cost’ at Belvoir Street Theatre