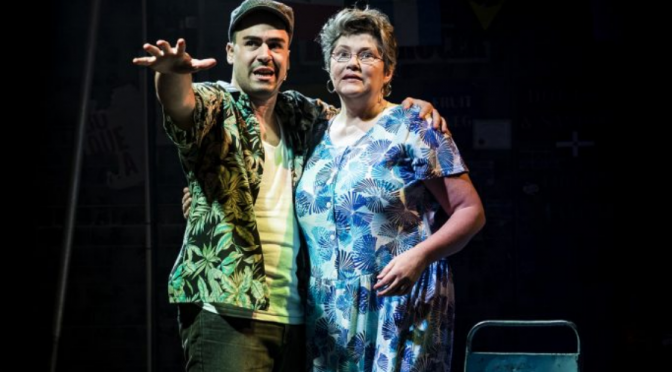 At the Hayes is an always entertaining podcast from the Hayes Theatre and it now has a new host, musical theatre veteran, Margi de Ferranti.  The Guide had the chance to ask Margi about this new challenge. And other topics that we wandered off into.

MARGI:            Oh it’s great. I’ve only done one so far. Actually when I’m finished talking with you I’m off to record EVIE MAY.  It’s such great fun. I was talking to someone and saying I’d love to do a podcast one day … and then this came up.

SAG:                It’s always a cracker listen because the Hayes attracts such extraordinary talent. You’ve been around the industry for so long, since Les Miz in 1987, so you’ll be speaking with people whose careers you have watched up close through the years.

MARGI:            Yeah well you would have heard on that first podcast where I spoke with Cait (Caitlin Berry) from SHE LOVES ME that I’ve known her since she was 15!

MARGI:            I was teaching her for about 3 years before she got into WAAPA and I’ve been watching her career ever since.  I think I do know a lot of people either personally or through someone else, so I’m very lucky.

SAG:                Is your focus going to be on the latest production at the Hayes? For that extra insight into it for the listeners?

MARGI:            Yes absolutely. I don’t want it to be just marketing for the show, though. I want to get into the lives of the people I interview and get their insights.

And talk about things in general with the industry. I think that there are a few things that need the fat chewed on and it’s going to be nice to speak with people and particularly up and comers, so to speak.

SAG:                Actually I wanted to ask you about that, because I know you are a mentor to many younger artists and you’ve had such a long career.  Are there tips and tricks to share?

MARGI:            ( laughs). Well what’s the old saying, if you hang in there long enough…. I was saying to someone that’s it’s so different now. Back in my day, my contemporaries were Jody Gillies and Delia Hannah and so on, there were more jobs than actors! I went for 3 shows in a week at the beginning of my career and got offered all three of them and then had to make a choice! I eventually landed on JERRY’S GIRLS.

But it’s much more difficult today. Not that it wasn’t competitive back then but producers are spoilt for choice today.  And they are all really good !!

I tend to teach the teenagers and under 12s who will be the next generation. And I encourage them to keep it real and understand there’s more to life … and not put too much pressure on themselves. Because I do get a lot of young people who have graduated and they might be going for their first audition … and my heart goes with them for every audition.

And it might be their eyes are brown and blue eyes are needed! You know.

MARGI:            Yeah, we talk about maintaining their mental health and maintaining pride and not taking it personally. Because you can’t.

I mean if you stuff up in the audition then you’ve just got to wear it and go boo, I stuffed up. So you didn’t learn the song well enough or you go for a role you know you’re not right for but you go for it anyway. So if there a reason, you know, that you don’t get the job then you wear it and move on.

But if you did a fantastic audition and you still don’t get the job then you cannot take it personally. It’s out of your control.

MARGI:            Because singing is 90% muscle memory and it’s the same as any physical training, you use it or lose it. It’s obviously is also about vocal health, you know keeping healthy, don’t abuse it but keep using it.

MARGI:            (patiently helping me to get the pronunciation) It’s funny I was on a bus on my way home last night and there were some Spanish kids talking to their Abuela and I thought there you go: a bit of research.

SAG:                I really enjoyed that production and I liked the character choice not to play her as old but as weary and worn out.

MARGI:            Oh thank you. For me she had come from Cuba when she was a child. She grew up a maid. She basically filled the shoes of the generations before her and the thing about Abuela is that she is the cornerstone of the community.

MARGI:            I’m lucky to have done a lot of my favourite roles in my career. I’ve done Dot in DAY IN THE PARK WITH GEORGE and Donna in MUMMA MIA. I’ve done Ilona in SHE LOVES ME, I did that years ago. And Rizzo in GREASE. So I’ve fulfilled that wish list of roles I wanted to play.

Then when I took on Abuela I thought … I can be a granny too!

Of course, for the older roles the pinnacle is Momma Rose in GYPSY but I think I’d have to kill a few people to get that role.

SAG:    It was here that Margie and I rattled off a tit for tat list of brilliant female artists . Get two old theatricals talking about musical theatre and this bit inevitably goes on for a while.

MARGI:            My final choice, I’m going for the grandmother in BILLY ELLIOT. It’s a beautiful role. I don’t think I’m old enough because, god rest her soul, beautiful Lola (Nixon) played her when she was 73. So I’m not sure I’m old enough for that yet!

So maybe no wish list.  But I would love to perpetuate this granny, older role employment. Maybe I’ll do some plays or something. Maybe I’ll write one.

MARGI:            I was talking to a friend the other day about why the Hayes is so successful every time and I think, yes I think, in the Hayes, because of its intimate nature you can only be truthful in your performance. It’s small and intimate and the audience is totally with you and you’re not lost in this barn of an auditorium and your performance has to be small and truthful. You can’t be over the top and you can’t play to the back row which is two miles away. And I think that is why every show seems to be nailing it.

You can still have a truthful performance on a big stage but they can’t see the whites of your eyes!

SAG:                That sounds the perfect topic for a podcast … just sayin! Thank you again for talking with us and our readers and best of luck with AT THE HAYES.

MARGI:            Thank you for all your reviews and all your support of independent theatre.

You can find the AT THE HAYES Podcast on iTunes or the podcatcher of your choice. 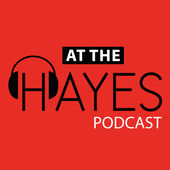