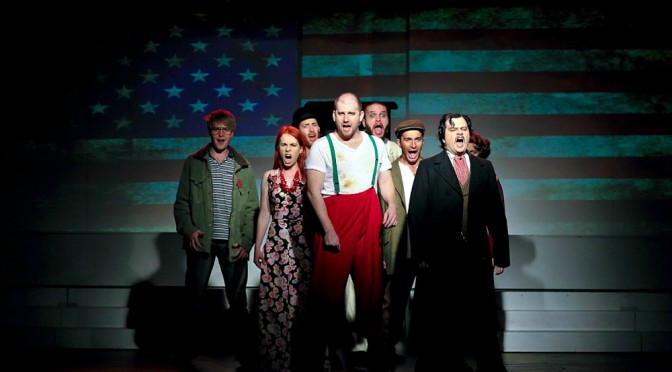 Held up at glorious gunpoint between Miranda Musical Society’s previous show OKLAHOMA and the upcoming ANNIE comes a successful revival of Stephen Sondheim’s ASSASSINS. This show is a cavalcade of would-be killers and successful assassins from several eras of history. They taunt and help each other from an impossibly simultaneous present when the opening number sends them off in a carnival game to kill with guns of various descriptions.

As the eight assassins interact and react to their failed American Dreams they reveal a myriad of personal sensitivities, disorders, obsessions and excuses. All believe their only solution is to kill a president. This production’s faithful depiction of the show contains much humour as well as accuracy of accent and cultural predicament.

This performance takes aim at aspects of the Off-Broadway 1990 original with the intimacy of venue and some staging. Larger versions of the show are reflected through the use of modern multimedia effects enhancing the stage and set. Costuming by Michael Astill Designs depicts the relevant era and each murderous character’s outlook extremely well. The versatile ensemble with many costume changes is also well catered for, even with some appearances in effectively exaggerated or comic book style.

Musically, Sondheim’s settings imbued with wit, narrative skill and melodic ingenuity are in good hands with this cast. Well-known full cast numbers such as the opening ‘Everybody’s Got The Right’, ‘Another National Anthem’ and ‘Something Just Broke’ have a satisfyingly full sound with these voices and clear off-stage band directed by Andrew Howie. ‘The Gun Song’ barber shop quartet was a showstopper.

Amongst the varied collection of fraternising assassins are many outstanding portrayals. Particular credit is due to Peter Meredith as Roosevelt’s failed killer Samuel Byck. His undulating monologues as an angry Santa are superbly structured and delivered. James Jonathan is focused in voice and action as a believable Leon Czolgosz, killer of William McKinley. An incredible portrait of housewife-assassin Sara Jane Moore is gifted to us by Chiz Watson. Her failed attempt to kill Gerald Ford is redeemed in a priceless scene by her ferocity against a tub of take away food.

The stories are linked together well by the voice and current day presence of Gavin Leahy as the Balladeer. His switch to Lee Harvey Oswald is quick and convincing. Andrew Fabris skilfully presents several degrees of fragility in his chillingly life-like playing of John Hinckley. His fine voice presents a strong ‘Unworthy of your Love’ duet with a charismatic Jennifer Parberry as Lynette Fromme.

If you are a newcomer to this musical or a big fan, hurry and keep it in your sights. ASSASSINS entertains with bright stars, sideshow lights and all the fun of the ‘life’s so un-fair’ till June 22 at the Sutherland Memorial School of the Arts, East Parade, Sutherland.

For more about information about the Miranda Musical Society, visit http://mirandamusicalsociety.com.au