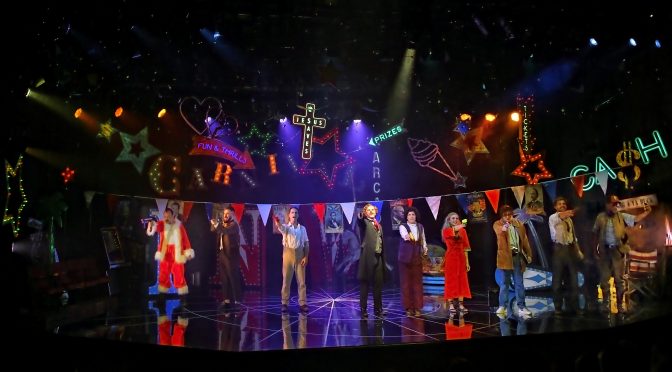 The period characters in ASSASSINS, playing at the Sydney Opera House, are a pretty wild-eyed bunch who make meeting them in an abandoned sideshow late at night pretty unappealing.  Led by John Wilkes Booth, who considers himself forefather of all American President assassination attempts, they are pretty evidently crazy.  But the more modern characters, apart from one, look alarmingly normal and rational.  That is … until a rifle is put in Harvey Lee Oswald’s hands towards the confronting ending of this show.  ASSASSINS is Stephen Sondheim’s 1990 malignantly comic attack on the American dream where normalcy collides with obsession in a dark musical which is thoroughly entertaining yet ominous. (Book by John Weidman)

We meet a gun seller.  Stereotypically recognizable for class and opinions  in his flannel shirt and truckers cap and red face, he is summoning the ghosts of assassins past to try his shooting game in a seedy rundown fairground sideshow.  All your ills will be cured he insists, as he hands out toy weapons to a series of characters who arrive through the auditorium.  As the crowd swells a leader emerges.  This is John Wilkes Booth and his story is told in some depth, his radicalism and political fervour undiminished by his inglorious end.  As successive assassinators, successful and unsuccessful, share their own stories, Booth will be challenged in his representation by the logic and truth telling of a guitar wielding balladeer.  A truth teller, even to Booth, this young buck is often above and apart from the events as retold.

It can’t just be Sondheim who makes this dark material into entertainment, it requires a stellar cast and the show playing currently at the Sydney Opera House is replete with talent and intelligent construction.  Beginning with David Campbell as Booth and he is commanding in the role.  He has bravado and falsity in his command of the cynical machinations of the man who considers himself mentor to those who follow him.  The whole cast are nuanced, constant and intrusive in each other’s stories and that ensemble feel lurks in the shadows even in the solos.

Kate Cole as Sarah Jane Moore is outgoing and busy and fussy and obviously thoroughly entertained by the other assassins, whereas Connor Crawford’s John Hinckley Jnr is insular, sullen and sulky… without disappearing.  Crawford gives his creation a credible psychiatrically disturbed aura that makes one want to ‘pop psych’ label him and his use of stillness is mesmeric to watch.  And the production is peopled with such clear characterisation and storytelling, the more crazed of the characters filling the stage with exuberant entitlement and the more restrained with brooding resentment .

Even though they are bright plastic colours, there’s even a seemingly harmless old-fashioned pop gun, having weapons pointed at you by pointedly crazy people is confronting and those themes are cleverly and discretely well explored by Director Dean Bryant and the creative team.  In Alicia Clements’ set design, sideshow macabre is everywhere without ever feeling crowded. Pieces are effortlessly rolled on or fly in to embrace the artist’s space for a solo and disappear just as easily for the big show stopping numbers where the choreography comes to the fore.  Andrew Hallsworth’s choreo has taken some songs literally, like the superbly danced Ryan Gonzalez show stopper of Charles Guiteau’s hanging.  Other places, the quality of the multi-talented cast make the dynamism and complexity of sequences like the President William McKinley handshake line so exciting to watch.  Clements’ costume design is just as complex with delicious details like the shoelaces and Booth’s signet ring and buttons.

ASSASSINS has Sondheim’s signature difficult music and this production is robustly served by the brilliantly designed audio by Nick Walker which was exceptionally mixed the night I attended.  All the opens were pinpoint and the band/ voice mix gave real warmth to Andrew Worboys intricate  musical direction.  Each of the cast have great voices and the mix both foregrounded individuals and blended the ensemble beautifully to sit on top of the music.  Alex Berlange’s lighting design does the same.  Big and bold, but importantly using a limited colour palette, when needed and narrowed to overhead and front spot in line with the emotion.  His use of pure white with only a touch of blue booster is a vital aspect empowering the chill of this show and his shadows are deep without being gloomy.

For this is a cast which need to be seen, even when they sit or slouch as silent observers.  It’s often so eerie seeing them emerge to exhort an assassin preparing for a kill, and highly unsettling at others as they burst forth in a cheerful display of admiration that is quite at odds with the subject matter.  Satire this may be but this splendid production brings contemporary realities to mind, especially when, abandoning their toy weapons, a lifelike rifle arrives on stage. That hits home.

ASSASSINS is playing at the Sydney Opera House until July 1st and it is disturbingly first rate entertainment!

One thought on “ASSASSINS AT SYDNEY OPERA HOUSE: DISTURBINGLY GOOD”