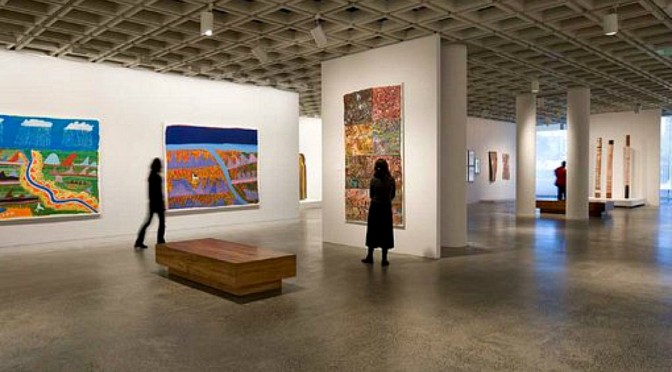 On entering the space, there are four walls featuring mostly photography, but also a video performance piece by r e a called ‘Poles Apart’. This piece was inspired in part by the lives of the artist’s great aunt and grandmother, who were both members of the stolen generation. While the sole figure in this work has her journey end in a messy climax, great aunt Sophie actually made an escape from her forced servitude, and returned home.

Exhibition highlights? I enjoyed Christian Thompson’s work – featured in two collections, the very impressive ‘Emotional Striptease’, and a smaller collection of three photographs including ‘Trinity’, ‘The Devil Made Him Do It’ and ‘Lamenting the Flower’. The latter three are a playful look at Thompson dressed in fanciful and carefully cultivated garb, exploring different aspects of Thompson’s identity. In ‘Emotional Striptease’ Thompson and his indigenous models pose in front of various cultural landmarks in Melbourne and wear stylised renditions of colonial attire, but they brandish objects that conjure the spirit of their ancestors, and a past life.

Another highlight was Darren Siwes ‘Jingli Kwin’, which is a striking portrait of an Aboriginal couple posing as royalty, reworking cultural stereotypes. It was a shame that only two of Siwes photographs made it into the exhibition, as the two ‘Kwin’ images are part of a series of eight.

EMBODIMENT is on until 22 March 2015, and is a free exhibition.  For more information:-http://www.artgallery.nsw.gov.au/exhibitions/embodiment/

This review was originally published on Joy Minter’s website- http://www.thebuzzfromsydney.com.