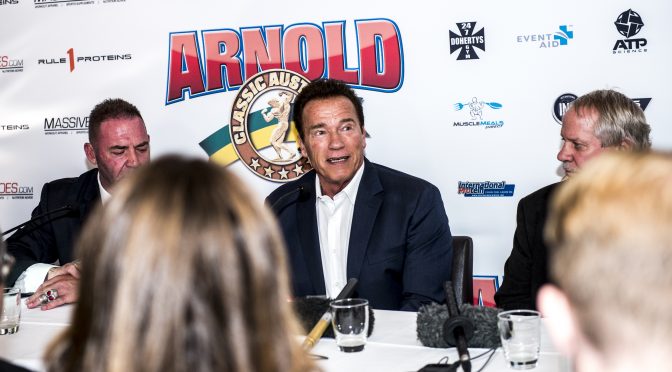 There was an impressive turnout at the Arnold Classic Australia Exhibition. Now in its third year, more than 50,000 people attended the 3 day sports festival at the Melbourne Convention and Exhibition Centre.

The Arnold Classic was established in 1989 and named after the former bodybuilder, turned actor, turned businessman, turned governor of California Arnold Schwarzenegger  and is held annually in Columbus, Ohio, United States. It is one of the largest multi-fitness sports festival in the world.

Australia is one of the only countries outside the US to host its own Arnold Classic event in partnership with Melbourne entrepreneur Tony Doherty, who owns multiple Doherty’s gyms across Victoria.The event is also held in Spain, South Africa, Brazil and Hong Kong

Athletes and fitness fanatics from all around Australia and the world competed in a broad range of events such as figure competitions, strongman, bodybuilding as well as sports like hockey, boxing, fencing, and even chess.

The exhibition featured more than 400 booths and outlets selling the latest in sports equipment, apparel and nutrition, business networking events and meets and greet opportunities with different athletes.

Schwarzenegger, a seven-time world bodybuilding champion, and the youngest person ever to win the Mr Universe title at just 20 years old was mobbed by screaming fans everywhere he went during the exhibition as he made his way across the room.

Hundreds of people gathered around him, hands with phones shot up in the air, trying to take a selfie with Arnold. He was also presiding and presenting at some of the competitions held.

This year, for the first time, the event also featured a kids expo, where children can practice sports, which is part of a larger effort to combat childhood obesity.

‘My fitness crusade is to encourage people of all ages to get off the couch and start exercising. It is so important for our youth to experience the benefits of regular exercise and playing sport,’ Schwarzenegger said at the press conference prior to the festival.

During the Arnold Classic Australia Business Forum, hosted by entertainment reporter Richard Wilkins, Arnold spoke candidly about his life and his long career, from his early bodybuilding years in Austria, to making it in Hollywood, to business to politics then back to movies.

He recited some of his iconic movie catchphrases in his thick Austrian accent, much to the delight of the audience while taking questions from them. His son Patrick was present in the audience.

During the forum, Arnold repeatedly mentioned that was in the early stages of making a sequel to his 1988 comedy film Twins that co-starred Danny DeVito, while taking a swipe at Donald Trump.

In 2017, Schwarzenegger replaced Donald Trump as the host of The New Celebrity Apprentice, though he left after one season due to conflicts caused by Trump’s public remarks and statements about Schwarzenegger being host of a season that had the lowest ratings in the show’s history.

This lead to a rather humorous public feud between the two that has spanned across Twitter arguments and viral videos.

“He is in charge of the country and has to make a lot of important decisions and all he keeps saying is that he is worrying and praying for me and for the show,” Arnold jokingly said at the Q&A session, “but I think the President is secretly in love with me,” the audience erupted in laughter.

While in Australia, Arnold was also a keynote speaker at The 2017 Total Success Summit in Sydney for the Bonus Real Estate Industry Day, organised by real estate mogul Glenn Twiddle.

For now it’s hasta la vista, baby, but don’t worry, Arnold will be back.