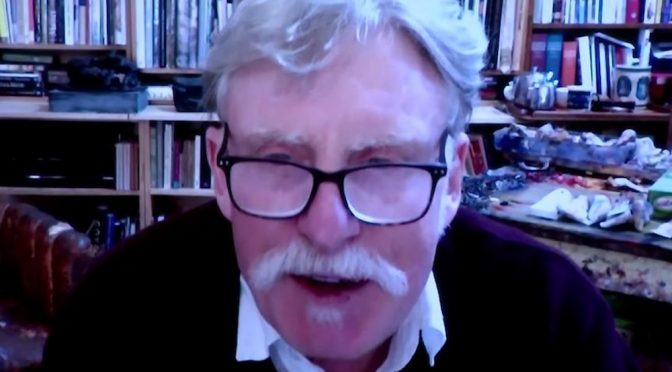 Melbourne-based artist Peter Wegner has won the 2021 Archibald Prize and $100,000 for his portrait of artist Guy Warren AM, titled Portrait of Guy Warren at 100.

Speaking from Melbourne, Wegner was emotional when Art Gallery of NSW director Michael Brand delivered the news that his brilliant portrait of Guy Warren was the winner of the 2021 Archibald Prize.

’When Michael called, my wife burst into tears, and I was speechless. This is an unbelievable moment in my life. It’s the culmination of years of my time in the studio and validation of my work.

‘When I think about the canon of all the previous winners and I get to be one of those names, especially in the 100th year, it is just an extraordinary feeling. I am humbled.

‘Guy Warren turned 100 in April – he was born the same year the Archibald Prize was first awarded in 1921. This is not why I painted Guy, but the coincidence is nicely timed,’ Wegner said.

‘I have been working on a series of drawings of people who have turned 100, beginning with my Aunty Rita seven years ago. I’ve gone on to draw more than 90 centenarians. I chose to paint Guy Warren because he is one of the most incredible centenarians l have ever met. This portrait honours Guy in the 101st year of his productive and meaningful life,’ Wegner added.

The subject, Guy Warren, himself a painter won the 1985 Archibald Prize with a portrait of artist Bert Flugelman, which is included in the Archie 100: A Century of the Archibald Prize exhibition at the Art Gallery. This is the seventh time he has been an Archibald subject, including a self-portrait in 1996. Warren started his working life at The Bulletin magazine, which was founded by JF Archibald, whose bequest established the Archibald Prize in 1921.

The Wynne Prize is awarded annually for ‘the best landscape painting of Australian scenery in oils or watercolours or for the best example of figure sculpture by Australian artists’.

Second-time Wynne Prize finalist Nyapanyapa Yunupiŋu is a Yolŋu painter and printmaker who lives and works in Yirrkala in north-eastern Arnhem Land. Her painting Garak – night sky represents Djulpan, the Seven Sisters star clusters that are also known as Pleiades.

Djulpan, the Seven Sisters, are one of the first creations. They left the ancestral elders Nyiwuṉba and Rranyirranyi at the islands called Djakapurra, Gurrarri, Nalkuma, Dhakalŋa, Bandayŋa, Ŋarrayarri and Wärru. They paddled until they arrived at Nanydjaka (Cape Arnhem). There they rested for some time to gather their strength, then set off again along the coast, passing the Gumatj lands near Manydjarrarrŋa (Daliwuy Bay). They travelled past the Dhuwa lands, Bariŋurawuy and Ŋumuwuy (Turtle Beach), and landed at Gärriri (the Yirritja side of the creek at Rocky Bay). They paddled up the beach called Dhuraka (Rocky Bay) and this is where the Djulpan ended their journey.

‘I was born on the beach at Yirrkala near where the Dhawu (large Banyan tree) stands. My father, Muŋgurrawuy, lived there with my mum, Buŋay, who was one of his many wives. I used to watch my father painting and he would tell me that later I would paint on my own. I spent many hours watching him,’ said Yunupiŋu.

‘The songline of the Djulpan Seven Sisters starts all the way north in the islands of Maŋgatharra (Indonesia) and ends right here. Right now is the season when we can see them in the stars, and they cry for us. I share this prize with my seven sisters, some of whom have passed away.’

‘This is a painting where the night skies and creation stories come together and take form on the artist’s Country, and provide viewers with a unique vision of the Australian landscape,’ said Brand.

The Sulman Prize, valued at $40,000, is awarded for the best subject painting, genre painting or mural project by an Australian artist. Each year a guest artist judges this prize. In 2021 artist Elisabeth Cummings selected 21 finalists for the Sulman Prize.

On hearing that her work Getting down or falling up had been awarded the Sulman Prize, first-time Sulman Prize finalist Georgia Spain said ‘I am incredibly overwhelmed and grateful to be awarded this year’s 2021 Sulman Prize. It is a huge honour to be hung in the Art Gallery of NSW and in the company of so many wonderful artists. I have great admiration for Elisabeth Cummings as a painter and am humbled to be chosen by her for this year’s prize.’

Getting down or falling up explores the idea of physical tension and connection captured in moments of conflict or pleasure. Limbs reach, push, pull and flail to reflect the feeling of getting up and falling down, over and over again.

About the winning work, Cummings said: ‘Getting down or falling up is a strong, confident image full of energy and movement. Georgia Spain’s use of the figure is imaginative and very much her own, and the painting is well resolved, vibrant and alive.’

Born in London and based in Sandford, Tasmania, Spain was one of the recipients of the 2020 Brett Whiteley Travelling Art Scholarship. She holds a Bachelor of Fine Arts from the Victorian College of the Arts where she was a finalist in the Majlis Travelling Scholarship and the recipient of Lionel Gell Foundation Scholarship.

For safety, tickets are dated and timed with limited exhibition capacity. Over the course of the exhibition visitors are strongly recommended to pre-book to avoid disappointment. Audiences also have the opportunity to purchase a Gallery Pass to the Archibald, Wynne and Sulman Prizes 2021, Archie 100, and Hilma af Klint: The Secret Paintings ($42 adult/ $37 concession/ $34 member).

Featured image : Melbourne artist Peter Wegner who won this year’s Archibald Prize with his portrait of fellow painter Guy Warren with his painting ‘Portrait Of Guy Warren at 100’.