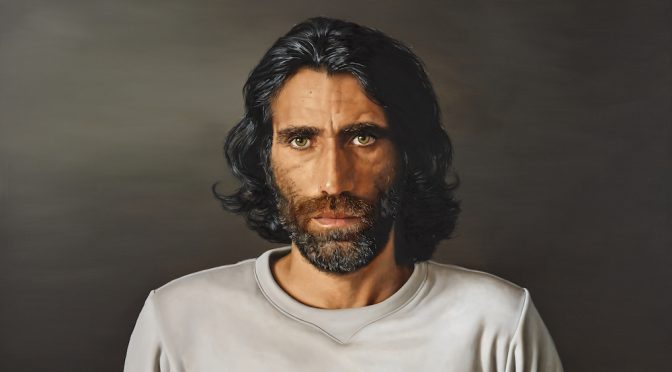 The artist, who is based in Lennox Head, NSW, first made contact with Boochani in 2018, while he was creating his award-winning short film Manus (2019) about Manus Island, where Boochani was held by the federal government for over six years as a refugee.

McDonald said he is thrilled and humbled that his portrait, Behrouz Boochani has received this year’s ANZ People’s Choice award.

“It’s the highest compliment to receive the vote of the public, for me as the artist but I suspect even more for Behrouz, who despite never even setting foot on the mainland, has earned the respect, admiration and even the love of so many Australians for his writing, his art, and his tireless struggle against captivity until he got to New Zealand last year,” said McDonald.

“I’ve depicted Behrouz directly engaging the viewer as a strong, confident and peaceful man who survived an ordeal and is now free. Despite all he has been through, Behrouz remains dedicated to his work and is open, gentle and kind.

“I gratefully share this honour with Behrouz. It is a privilege to have painted him, to call him a friend and to have had the opportunity to get to know such an exceptional and inspirational man over the past few years,” Boochani said.

Born in Sydney in 1961, McDonald studied at the Julian Ashton Art School in Sydney and the Florence Academy in Italy.

Boochani was pleased to hear of McDonald’s win, saying: “Angus spent so much time to understand the different layers of my story and travelled to New Zealand so we could spend time together. We had a long conversation on the elements of injustice. He as an artist captured what was important to me with his deep insight and remarkable skills. This work represents me as a person that exists, not a person who was created by media or what people want to see.

“I think this work has resonated with the public because people see it as a symbol of hope and resistance, especially minorities and refugees in the community or in detention. Some may only see a portrait, but for me it’s a reminder of those who helped tell my story, especially Dr Omid Tofighian who translated my book and Moones Mansoubi who translated many of my articles. All of us created this together.”

The New Zealand government granted Boochani refugee status in July 2020, permitting him to live there indefinitely.

“Angus McDonald’s striking hyperrealist depiction of Behrouz Boochani’s piercing gaze captivated – and, I dare say, challenged – audiences from day one and is an important statement of what the public view as a significant human story,” he said.

This year, the lucky voter is Vincent Boccon-Gibod from Little Bay, NSW who receives a $2000 cash prize from ANZ.

“My family and I have seen every Archibald Prize since we migrated from France to Australia in 2013. We love this exhibition, it helps us to better understand our new country through the variety of subjects chosen by the artists,” said Boccon-Gibod.

“When first looking at Behrouz’s portrait I was drawn by the mesmerizing intensity of his eyes and yet I wondered what the story was behind the portrait. Once I read about his history it all made sense to me and I could see his incredible ordeal unfolding in his eyes. I am glad Behrouz is now free and I hope he can look forward to a new life in New Zealand,” he said.

The Archibald Prize People’s Choice was first awarded in 1988 – now supported by presenting partner ANZ – and this year 13,645 visitors to the Archibald, Wynne and Sulman Prizes 2020 voted for their favourite portrait.

ANZ Group Executive Institutional, Mark Whelan, said: “Congratulations to Angus McDonald on winning the ANZ People’s Choice award. This year marks the eleventh year of support from ANZ for the competition, and yet it still continues to surprise, challenge and engage us and the wider community. We are proud to continue being a part of this important celebration of the arts in Australia.”

The Archibald, Wynne and Sulman Prizes, the Young Archie competition and the Archibald Prize regional tour are all generously supported by presenting partner, ANZ.

Finalist works for the Archibald, Wynne and Sulman Prizes 2020 are on show at the Art Gallery of NSW until 10 January 2021.

Archibald Prize finalists will then go on a tour of regional galleries and museums beginning at Tweed Regional Gallery & Margaret Olley Art Centre on 22 January 2021.

For more information about the creation of this work, see Behrouz Boochani and Angus McDonald in conversation with Benjamin Law for the recent Art After Hours Online talk on the Art Gallery of NSW YouTube channel.

All 2020 Archibald Prize finalists can be viewed on the Gallery website.