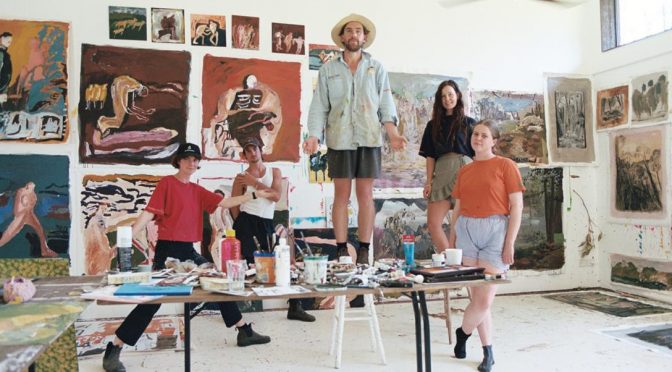 As in 2020, this year’s Scholarship will be awarded to five young artists who will each be offered $10,000 and a two-week residency at the Shark Island Institute in Kangaroo Valley, New South Wales, between 1–15 November.

During the residency, at which the five recipients live and work together to develop new bodies of work, a mentoring session by Archibald Prize winning artist and former Scholarship winner Ben Quilty is offered as well as visits by other prominent arts figures in the industry.

‘The artists who attended the Shark Island Institute residency, for which we are very grateful to Ian Darling, found it to be a rich and rewarding experience of great benefit to their practices and careers.  All reported that the residency – within the extraordinary natural beauty of Upper Kangaroo Valley – provided new discoveries in their practice,’ said Brand.

Recipient Georgia Spain said about the residency: ‘I’m not exaggerating when I say that the two weeks were completely life changing for me, and signified not only a direct shift in my practice, but also in my dedication to pursuing a life of making art. I came away with new energy and motivation about painting which I believe came from spending time around other artists.’ Spain went on to win the 2021 Sir John Sulman Prize for her work, ‘Getting down or falling up’.

Artists can submit their applications online from today until Monday 9 August, after which time they will be judged by Sydney-based artist Abdul Abdullah, a five-time Archibald Prize and Sulman Prize finalist and a Wynne Prize finalist in 2019. Abdullah is an Australian multi-disciplinary artist with a practice that is primarily concerned with the experience of the ‘other’ in society, in particular the experience of young Muslims in Australia.

The finalists and five recipients of the Scholarship will be announced on 27 October and their work will be shown in an exhibition curated by Wendy Whiteley at the Brett Whiteley Studio.

Mrs Beryl Whiteley (1917–2010) generously allocated funds for the scholarship in memory of her son, Brett Whiteley, both to encourage excellence in painting and to offer young artists the same opportunity to develop their careers as were afforded to her son.

The 2021 Brett Whiteley Travelling Art Scholarship free exhibition will open to the public at the Studio from 28 October and on the Brett Whiteley Studio website.

This is the link to click on to apply for the Brett Whiteley Travelling Art Scholarship. Good luck!

About the Brett Whiteley Studio | On Gadigal Country (temporarily closed to the public in line with NSW Health advice) :

Brett and Wendy Whiteley first bought the former Surry Hills warehouse in 1985, converting it into a studio and exhibition space where Brett lived and worked from 1988 until his death in 1992. The space opened to the public in 1995, two years after it was purchased by the NSW Government. The Brett Whiteley Studio offers visitors the unique opportunity to experience the atmosphere of the artist’s working space, with paintings, art materials, Whiteley’s collection of art books and objects that inspired him, alongside the graffiti wall covered with his quotes and images. The Studio is managed and owned by the Art Gallery of NSW. Free admission is made possible by J.P. Morgan, principal sponsor of the Brett Whiteley Studio.